Evolving words: bringing the past to life 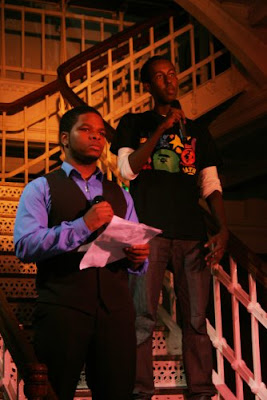 Evolving Words is the second of three Manchester Literature Festival events to be held at The Manchester Museum in conjunction with its Darwin extravanza: The Evolutionist (the third is The Bird Book, on Saturday).

As we gather this evening (22 October) in the Animal Life Gallery, the event's organiser Elizabeth Lynch explains that the Evolving Words project is funded by the Wellcome Trust and is running in six cities around the country, bringing together poets and scientists with young people to explore the impact of Charles Darwin’s ideas and his example as a scientist. Where could be more appropriate to perform the resulting work than surrounded by a variety of stuffed species and with an audience sat beneath the bones of a sperm whale?

We are introduced to the Young Identity young people's collective by Shirley May of Speakeasy and Ali Gadema (aka Frisko Dan), whose show Contradictions will be at the Contact Theatre in November. Shirley and Ali are the Manchester poets who have worked with these young people to produce tonight’s performance.


For the next 30 minutes or so, a transformation happens and the gallery is brought to life with a blast of youthful energy and enthusiasm. Thoughtful, humorous and reflective words ring out in performances which show off talent and confidence in spades.

The subject matter has sparked a range of themes, from personal struggles reconciling evolution with religion to ponderings on how technology will affect future evolution.

There are many highlights, but as Saquib Chowdhury walks down the staircase at the front of the room reciting his poem on the supposed conflict between religion and evolution, he has the audience hanging off every word. His conclusion – 'Evolution does not interfere with morality' – is met with cheers from the audience.

Touching on the same theme but with a very different interpretation is Elmi Ali, who makes us laugh as well as think through his words on Darwin’s struggles with those who shunned his theories. Fascinating and funny, this enthusiastic performance is impressive.

One of tonight's most prolific poets is Bethany Hermitt, who gives a biting delivery of her carefully crafted lines in three separate performances.

The response of the performers and the audience at the end of the evening shows that everyone has enjoyed themselves tonight. This has clearly been a labour of love for everyone involved and it would be impossible not to feel uplifted and inspired by the results of young people taking the time to think about science, history and ideas, and then to articulate their own thoughts so eloquently. At the end of the performances, Manchester Literature Festival Director Cathy Bolton sums up what many of the audience must be feeling when she tells us: 'I can’t remember the last time I was in a room with so much talent.'