Frolicing like Sheba: A surreal history of sex (with many gaps) from Martin Amis, Carol Mavor & Will Self 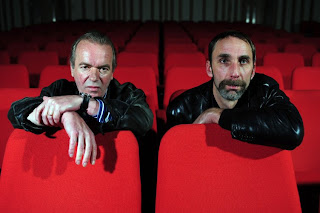 And so here we are in the lofty environs of the Martin Harris Centre for Music and Drama (a large lecture theatre that appears to have stray pieces of decking glued to the walls at random intervals) to hear Prof Martin Amis, Prof Carol Mavor (author, most recently, of the book Reading Boyishly: Roland Barthes, J. M. Barrie, Jacques Henri Lartigue, Marcel Proust, and D. W. Winnicott) and author Will Self discuss Literature and sex.

Amis (looking smaller and older than ever before, but crackling with wit and erudition all the same) kicks off proceedings by quoting his father, Kingsley Amis, who said that sex in literature couldn't be done as it 'deuniversalises' your character (sex, Amis implying, being such a personal act that all of your characters foibles will distance them from the reader). Amis fils is in accord with his dad and claims sex is disastrous in literature - 'you can't write about good sex' - in the same way that you can't write about dreams ('or only for a line or two'). He quotes Henry James, 'Tell a dream, lose a reader'. What you can do, Amis continues, is write about bad sex. The main thrust of his talk, then - if you'll forgive the pun - centres on a surreal history of sex in anglophile literature 'with many gaps'. Amis then takes us on a tour, from Chaucer through Gawain the Green Knight (with its 'recurring scenes of sexual temptation') to Shakespeare's Sonnets (themselves 'a kind of a peak for writing about sex') before arriving at 'a disassociation of sensibility' (poets no longer able to think and feel at the same time) that the Romantics tried and failed to fix (although Byron and Keats came close, Amis posits, citing a hilarious instance of Larkin's marginalia to Keats' 'Lamia': in 'Lamia', Keats wrote 'and into her Dream he Melted' to which Larkin wrote, 'You mean he fucked her?'). The tour then dallied a little in the country of Dicken's Hard Times (in particular a visit by Louisa Gradgrind to her 'utilitarian' father, in which she attempts to discuss her marriage, drawing his attention to some huge chimneys outside the window, saying, Father, at night flames shoot out, only for her father to say I don't see the relevance - Amis says he can't help but wonder if Dickens felt as Louisa's father did), Eliot's Middlemarch & Austen's Pride & Prejudice (Amis jokily said 'if the novel has a fault it's that we don't get a 30 page sex scene'). From here we pass Smollett and Richardson (for whom girls can't have sex unless they're drugged) through Hardy to Lawrence - who obviously got in a lot of trouble as far as Lady Chatterly's Lover, The Rainbow, Women in Love & a later poetry collection called Pansies was concerned. Amis said, 'I think Lawrence is tremendously groundbreaking but never got anywhere with sex. His sexual unions were just like fights, and all became tremendously antagonistic.' Post-Lawrence, however, writing about sex suffers another blow - absolute freedom (what Self will later go on to call 'the death of affect', from JG Ballard, and which comes down to 'the naming of parts'). Stuttering past Updike (whose approach, to the audience's great amusement, Amis cited as being the equivalent of sending 'a Japanese film crew into the bedroom'), Amis arrives at Nabokov's Lolita - the book around which much of the evening's debate centres. Nabokov was 'consistently good' when it came to writing about sex and Lolita was his 'great flower', in which sex is both 'slightly comic and macabre'. Later in the evening, in response to questions, Amis unpicks Nabokov's own relation to Lolita, and how writing about sex with a young girl cast a shadow over everything else he did, a shadow that can be seen in the fragment of a novel, The Original of Laura, to be published later this year. Writing about sex, though, Amis concludes, is a 'great corrupting thing' akin to 'the brothelgoer's mad power' - choice - 'and the novelist has infinite choice', itself 'a fat corrupting thing'.

Professor Carol Mavor then provided a sort of abstract interlude in which (looking something like Crystal Tips, of Crystal Tips & Alistair fame, with the voice of an Americanised Julie Burchill) she talked about the letter O in sexual literature (which may sound like a racy episode of Sesame Street but - given the reliance on strange images flashed up on a screen - was actually closer to a race through the album covers of the Pixies), before Will Self (lounging back in his seat like a bearded Daniel Day Lewis, spoiling for a fight) sallies forth, first responding to Mavor's reference to Proust ('Proust becomes sexier when you realise Albertine is Marcel's Belgian chauffeur Albert') and then to Martin Amis, saying he can't concur with either, 'practically, because we'd have nothing to talk about, but also generally, because it is possible to write well about sex.' Self mis-quotes from Solomon's Song of Songs (referring to a beard like a pile of wheat when in fact the beard 'is as a bed of spices, as sweet flowers' and the belly 'is like an heap of wheat set about with lilies') as he rolls the words 'Biblical sex' around his mouth like a lozenge. 'The erotic is metaphoric,' he said, 'it's always about more than cocks and cunts' - but therein lies the problem: 'It's become permissible to write about anything' which has created a 'crisis about writing sex'. Later, in response to a statement on censorship from one of the audience, Self goes much further, saying that the problem isn't one of censorship, it's the fact that there are too many voices competing for attention. 'It's hard to avoid naming parts - you look recherche if you don't,' Self continues, but male and female writers these days are 'full of what Freud called 'full genitality'' (apparently, Self digresses, Freud stopped having sex at 45 - perhaps, he wonders, that is something we should all do). What is most offputting, Self says, is 'a sense of writers getting their jollies'. From here, we are treated to Self's views on Ulysses (a novel that was 'way out there in terms of top quality literary wank scenes', Leopold Bloom's wank scene being 'well worth wading through the rest of the book for') and Lolita, once more (which 'manipulates the reader's own desire'). Touching on the more controversial aspects of Lolita, Self claimed these days 'Nabokov would be damned for ludicrous sesquipedalianism', constantly bothered by journalists asking if he'd swallowed a dictionary before he wrote (much as Self himself has been bothered by this question). At this point in proceedings, Self said he would 'slide out of the encumbrance of discourse...' to great laughter, 'only to re-enter, fired up anew...'

The evening concluded with a series of questions from the audience, circling shark-like around the issue of Humbert Humbert and whether a writer should be 'allowed' to give voice to characters who have feelings that now may be reprehensible to us (Amis said, 'Writing is freedom' but that, particularly in the case of Nabokov - 'sex is a destablising, deuniversalising force'). The one image to be taken away from the evening, though, is this: early on in the evening, Self said there were a number of literary criminals given to writing bad sex; during question time, Self said that Sebastian Faulks was one such writer (Self had had to read Faulk's Bird Song - for research, you understand - and felt Faulks was all trussed up in his tweeds). What Faulks needs to do, Self said was 'frolic like Sheba'. I imagine, as the audience made their way home, frolicing like Sheba was high on the agenda...

Hi, I don't suppose this event was recorded by any chance? A number of Amis' events have been put up on the following URL, and I was hoping to hear this one also.

Sexual speech—and by extension, writing—has been subject to varying standards of decorum since the beginning of history. For most of historic time writing has not been used by more than a small part of the total population of any society public sex positions. Only in the 19th century and later are there societies where over half the population are basically literate. The resulting self-censorship and euphemistic forms translate today into a dearth of explicit and accurate evidence on which to base a history. There are a number of primary sources that can be collected across a wide variety of times and cultures, including the following:

Hello .. I am truly grateful with those responsible for creating this blog, reading is something that I enjoy very much, for this reason, I have a habit to read articles like this every day. The theme was really interesting, as the content. Some time ago I attended a conference called guanacaste costa rica real estate, this conference was very creative, and also developed similar themes to those discussed on this blog.

Christian Louboutin sale said...
This comment has been removed by a blog administrator.
July 27, 2011 at 4:27 AM

Christian Louboutin sale said...
This comment has been removed by a blog administrator.
August 9, 2011 at 3:00 AM

Christian Louboutin sale said...
This comment has been removed by a blog administrator.
August 10, 2011 at 7:22 AM