‘Coincidence is just an explanation waiting to happen’ - Kate Atkinson 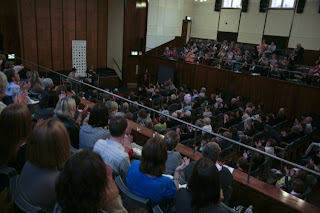 Sitting at the rear of the Kate Atkinson event I had a really good view of the whole room and watched as the place filled up. It was remarkably busy for four on a Friday and it looked as if people had taken time off work to come to the event. Two women sitting beside me anticipated what Kate would look like and seemed disappointed to find that she had walked right past us and was sat on the stage with her handbag. She was introduced by Jerome de Groot as ‘one of the best writers of the festival’ and there seemed to be a big expectation from the audience. Her semi-confessional approach went down well but they heckled mildly when the microphone started to feed back.

When an audience member asked Kate whether she stood by the words of her protagonist Jackson Brodie and believed that ‘every coincidence is an explanation waiting to happen’, she agreed with a look of sincere amusement, as though she hadn’t expected such a question. She told us that she was ‘defiant’ about coincidence, believing it to be necessary to novelwriting, and art in general. The discussion moved on to the imaginative process and how coincidence is essential to it. She said that something which had the power to shock so much in real life ought to be exploited in fiction.

The extract which Kate read from her novel When Will There Be Good News was concerned with coincidence. The silver locket which symbolises the cheapness of Reggie’s mother’s relationship with her new boyfriend, Gary, is also the catalyst for her death. The first time her mother leaves the country on holiday in twenty years she dies a tragic, picturesque death. There is a direct parallel with Ms MacDonald’s inability to eat and the tumour which is ‘eating’ her. There is no way that you can forget this is literature, it is an artificial construction. Kate Atkinson later emphasised how she believes that there is no such thing as realism, fiction is all artifice.

The novel was also full of myths. The mug representing Charles and Diana’s fairytale wedding, the mermaid-like death of Reggie’s mother and the ‘Rapture’ all symbolise/represent different kinds of myth. Even the description of Mrs. MacDonald’s bloodshot eye is described as ‘like a red star’. This use of myth is bracketed in a strong way with religion. There is no sense that Ms MacDonald’s wild, apocalyptic faith has anything to do with reality. In an interesting aside, Kate Atkinson mentioned that the reason she became interested in the ‘Rapture’ was because she discovered that George W Bush’s belief in it led directly to his anti-environmentalist stance. He sincerely believes that the world must be utterly annihilated before the Second Coming. This violence in the novel is offset by Reggie’s innocent wish for a religion which nurtures rather than a god who destroys people via a demented ‘lottery’ of destruction.

Another issue which came up was that of genre fiction. As Kate Atkinson has written a series of novels with a recurring detective character, there was some interest in discovering whether she considers herself a ‘crime’ writer. It is hard to know what constitutes a crime writer, a literary writer or even a literary crime writer. Is Thomas Pynchon’s latest novel Inherent Vice classed as genre fiction even as it parodies and transcends those tropes? There are lots of other examples - Paul Auster’s New York Trilogy, Peter Hoeg’s Miss Smilla’s Feeling for Snow. It is an interesting question to think about whether a novel with a detective is necessarily detective fiction. Kate Atkinson said that she writes the book that she wants to and does not consider those kinds of false classifications. She made the point that Dostoevsky and Dickens both wrote crime novels, before adding that she did not compare herself to either of those. The comparison, however, was left hanging.

When you go to an event at a literary festival, it seems more than likely that you will make some attempt to come to an understanding of ‘the literary’. There seemed to be an unspoken agreement between Kate Atkinson and the audience that everyone in the room was ‘literary’ by virtue of being there, but I was more interested in who was considered outside that description. During the discussion, there was mention of Virgil, Dostoevsky, Emily Bronte and Dickens. Reggie was described as a self-consciously literary heroine; a Dickensian orphan. Where things became more complicated were at the description of Gary, Reggie’s mother’s boyfriend. Once he was said to be someone who did not fully believe in joined-up handwriting. Later, he is seen straining under the weight of a decision between two cans of soup. Both times the festival audience laughed, and they were the moments when they seemed to laugh the loudest. Was this uncomfortable laughter at someone different, or defensive laughter or something slightly more sinister? Perhaps it was simply the enjoyment of comic writing, of the order which fiction can place on a world of disarray. This decidedly non-literary character allowed Reggie’s character to exist. Like Kate Atkinson said, fiction has endings where none should really exist. This kind of world can also provide easily classifiable characters to make us feel safe.

My favourite question was a slightly odd one. Someone asked Kate Atkinson what music she listened to whilst she was writing this book. She said that she listened to a lot of Beethoven and ‘dismal Country’. The idea of the landscapes of those songs made sense in the context of the romance and myth of When Will There Be Good News. I loved the idea that the songs she was listening to bled into the writing in some way. It had to be more than a coincidence.

Laura Joyce runs the Red Shoes Workshop in Manchester and has a blog at www.metafiction.wordpress.com.
Posted by MLF Blog at 6:14 PM