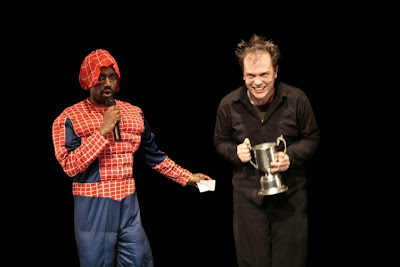 The funky greenroom is the venue for tonight's Superheroes Of Slam Final (21 October), hosted by the Manchester Literature Festival and Commonword Cultureword. For those of you who have never been to a poetry slam before, this is where poetry meets performance, where the wordsmith meets the rapper; it's a literature event where the audience is allowed to heckle the performers!

So, in the all-black auditorium, after a rather suspenseful pause, Spiderman arrives. He prowls around the stage, creeping into the audience, before finally revealing himself as the legendary Julian Daniel. Julian oversees the evening’s revelry with a deadpan, understated humour, and a complete disregard for technical issues. Assisted by Catwoman, and in front of a lively and enthusiastic audience, Julian describes poetry slam as ‘half poetry, half wrestling’.

The performers tonight have battled through heats in Oldham, Bolton, Hebden Bridge, Wigan, Leeds, Liverpool and Manchester to make it through to the final. So, with £250 and the Dike Omeje Award at stake, let’s get on with the show. We are treated to two poems from each performer, all scored by the judges on performance and content.

Azalia Anisko's performance is vibrant and exuberant and her delivery is passionate and committed, although her first poem is a slightly laboured metaphor of poetry as pregnancy. Her next is a more interesting biscuit metaphor which culminates in the man dipping his chocolate finger into another girl.

Mark Mace Smith shows clever use of language and has a husky, fluent delivery, but the subject matter is a little clichéd.

Chanje Kunda gives melodic and physical performances. Incorporating humorous references to popular songs, and even some funky dance moves, Chanje is witty and extremely popular with the increasingly rowdy audience.

Dominic Berry makes good use of the performance space, engaging with the audience and providing one-man physical theatre. What’s more, Julian credits him with inventing ‘poetry-cise’. Keep fit and create rhymes… it’ll be all the rage next year. Dominic really brings his poetry to life, savouring the language. Beautiful sentiments, passionately delivered, he gains lively cheers from the audience.

Sophie Hall has a vibrant personality and an even more vibrant jumper, and presents a witty and likeable display of her hatred of Davina McCall. It's a nice idea, with catchy lines such as: ‘You bought her shampoo and now she’s coming to get you’, but it unfortunately lacks substance somewhat. There are some amusing pieces of word play, but otherwise it's rather bland.

Sean Karoonian uses effective word play and strong imagery, but it's all on a political theme, and one audience member protests that he's ‘too preachy’. He gives a fantastic technical performance, using rhythm, rhyme and syntax with great skill. Sean has a great deal of potential, but I would like to see him talk about something personal to himself.

Entering into the superhero spirit with a Batman T-shirt, the final competitor, Chris Jam, bombards us with a torrent of wordplay. At one point he claims ‘the Tower Of Babel would seem like a safe haven for other lyricists’ – I would think so! The performance evokes more a rap battle than a literary event with its confrontational, cheeky style, and it proves popular with the audience.

We are also treated to a performance by Shamshad Khan, whose beautiful and delicate pieces are deeply rooted in her Asian heritage, and use song and mythology as well as vividly evocative language. Her rich, sensuous voice has us all spell-bound. Shamshad is involved in a workshop on 26 October at Isis Café on Stockport Road – it should be worth investigating!

The top two scorers who go into a play-off are Chanje Kunda and Dominic Berry. Chanje provides a heart-warming piece about the beauty of learning to love yourself for who you are. Dominic encourages some audience participation, engaging us all by announcing: ‘It’s a love poem for a girl, also a vegetable.’ I don’t think any of us expected to spend our evening shouting, ‘Oh aubergine!’ Exuberant, lively, expressive and totally nuts, Dominic owns the stage and is crowned champion.

Dike Omeje’s sister presents Dominic with the trophy, which I later see him clutching as he rushes excitedly up and down the street outside!

So congratulations to our Superhero Dominic Berry, and thanks to the legendary Julian Daniel and everyone at Commonword and the greenroom for a fun and exhilarating night!