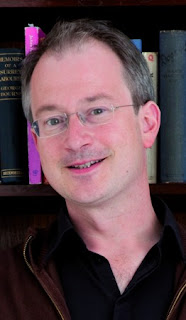 21st October
Ever read a book and thought it was terrible? Well maybe you should send a copy to Robin Ince, the stand-up comedian who has created a unique comedy show centred upon bad books.
At the Queen of Hearts in the bustling student suburb of Fallowfield, Robin Ince staged his hilarious one-man comedy show, The Bad Book Club to a sold out audience. As a sports bar, the Queen of Hearts may seem an incongruous place to stage a night of alternative comedy, however with the flat-screen TVs turned off and the interior lighting set to dim, the old church was magically transformed from a sports bar into a comedy club style venue.
Bounding on stage with his arms gesticulating wildly and speaking what seemed like 600 words per minute, Ince hastily explained the premise of his Bad Book Club which goes something a little like this; Ince scours second-hand bookshops across the country searching for any inadvertently awful books he can find, which he then buys, reads and goes onto discuss with his audience for comic effect.
Ince began his Bad Book Club five years ago and has since amassed quite a collection of bad books. His Manchester appearance included some Mills & Boon, the giant killer-crabs series by Guy N. Smith, and psychology books such as: How To Undo A Maiden, Man’s Book: Temptation in a Private Zone and Sex is Not Compulsory.
Using only a microphone, a homemade CD soundtrack and a pile of books, Ince started his book club with a discussion on Mills & Boon which he said is like, “the Andy Warhol factory of romance.” As Mills & Boon is such a formulaic book series Ince asked a member of the audience to pick a page at random so that he could prove that any page could be read for comic-effect. And it just so happened that page 92 from Stormy Vigil began right in the middle of a not-so-steamy sex scene.
As well as his literary talents for close-reading of texts, Ince also has a talent for impersonations and he complemented the book readings by donning faux voices for the characters and sometimes reading along to music. At times the voices he adopted sounded reminiscent of monologues that accompanied low budget TV shows and films from the eighties, and if anyone is familiar with Garth Marenghi’s Darkplace which was screened on Channel 4 in 2004, they will be able to hear the similarities.
Some of the books he enthused about the most were Guy N. Smith’s giant killer crab series, whose titles include Crabs on the Rampage, Night of the Crabs and the succinctly named Killer Crabs. The plots of these novels sound as daft as any B-movie and their sex scenes are equally as clunky as any found in a Mills & Boon. But what makes these crab crazy books uniquely funny is that they are set in the 1970s and 80s, so there’s an element of political incorrectness involved. Ince cited one instance in Night of the Crabs when two characters both watching a man being killed by giant crabs remarked: “We can’t do anything, he’s deaf.” And no, that’s not a typo.
Another sentence that went awry cropped up in The Book of the Netherland Dwarf, which in reference to Netherland Dwarf rabbits says: “Unlike a dwarf in real life, it is not deformed”.
Truly awful sentences like the two mentioned above made the audience in the Queen of Hearts audibly groan and squirm in their seats, but that’s exactly the kind of reaction Ince buzzed off while onstage. As a loud and opinionated comedian, Robin Ince is not afraid to speak exactly what is on his mind, (even if this does get him into trouble with his wife) and two months ago, he gave up cigarettes and alcohol but this has in no way curbed his enthusiasm or creativity.
Following a short interval he started the second half with a lengthy digression about the perils of modern life and then returned back to his books by reciting a poem entitled ‘Jam’ by Danielle Steele from her Book of Love Poems. From what could be discerned from the abysmal poem, it was literally about eating jam for breakfast, “some sugar maybe / But always jam”. Ince described the poem as, “sentences in a shape” and recited it in a jazz style with accompanying music. It ended flatly on the rhyming couplet of ham/jam which is possibly one of the worst uses of the rhyming couplet in the history of English literature.
Worse was to come though when Ince closed his show with a return to the killer crabs, and this time it was Crabs on the Rampage which contained the lines, “crabs, crabs, crabs. Crabs the size of beach donkeys.” Never before has there been such delicate use of metaphor.
Tantalisingly, Ince ran out of time before he could recite any of Leonard Nimoy’s poetry and it’s a also a real shame that he could only bring one-fifth of his books for the Manchester Bad Book Club - it would be well worth finding out what other hidden gems there are in the remaining four-fifths.
If his Bad Book Club tours up north again, I urge every comedy fan, and especially every Mills & Boon fan, to go and see his show.
Catherine Fearn graduated from Lancaster University in 2007 with a BA Hons English Literature Degree and whilst there became involved with the student newspaper SCAN, gaining two years’ experience as an Arts & Music Reviewer. Since graduating she has been employed as a proofreader for a Manchester-based retailer and is also currently studying a Freelance Arts and Music course with the London School of Journalism.
Catherine's blog is called The Poplar Tree and is one of Manchester’s literature-orientated blogspots which includes editorial features on authors, reviews of books, films and anything in-between, such as TV programmes and current affairs.
Posted by MLF Blog at 11:21 AM