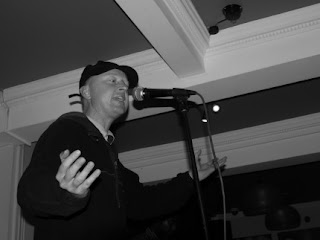 21st October
“If I were a poet,” I decided whilst on the way to the MLF’s Comedy Poetry Slam last night, “today I would be an Angry Poet.”
Fuelled by the flames of a passionate rage, I’d rant and rave about the injustice, trauma and downright betrayal of my evil nemesis... namely, the 111 bus, which had been a no-show for 45 minutes, thus ensuring my late arrival at tonight’s event. Thankfully, my post-bus five-minute dash in high heels proved to be worth its crippling effect, as I leapt into the main bar of The Northern on Tib Street just as Manchester-based comedian and compère for the night, Julian Daniel, reached for the microphone.
The Northern is one of those pubs that you’ll often find participating in local festivals and events, whether it’s a meeting of digital media professionals or a performance by some up-and-coming musical talent. It’s a lovely venue, too, and Mancunian at its heart and soul, from the northern-centric playlist, to the giant portrait of Mark E. Smith on the wall of the exterior smoking area. This evening, the pub had a warm and bustling atmosphere, with a sell-out audience responding enthusiastically from the offset to Julian’s friendly banter.
Never having been to a poetry slam before, I had no idea what to expect. Thankfully, our crowd-pleasing compère Julian laid out the rules from the start. Nine budding poets had signed up to compete against each other by standing up to the mic in turn and reciting their personally penned, witty verses in an attempt to take home the booty of a small cash prize, a bottle of bubbly generously donated by The Northern, a festival T-shirt and – perhaps most importantly of all – comedic kudos for the night.
Three volunteers from the audience – or groups of volunteers, as it turned out –were handed score sheets by Julian and appointed the heady task of judging the evening’s talent on behalf of us all. Our ability to applaud and volume of laughter were conscientiously tested by Julian before contestant number one was welcomed up to the mic.
As it turned out, a well-penned tirade against the 111 bus might not have felt out of place amongst the myriad of topics chosen to be immortalised in verse by our local bards, which ranged from the soul-crippling employee regulations of call centres, to the remarkably chewy nature of suppositories.
I have to pause here to apologise in advance for the inaccuracy of any of the poets’ names, but they all deserve a mention, even a misspelt one, for their heroic and wholly entertaining participation on the night.
There was Mark Edmondson’s tragicomic tale of morbidly obese Denise and her mobility scooter; Dave Till’s hymn of praise to the exotic, amniotic delights of a well-drawn bath; Alex Keelan’s sweetly delivered satire on modern life and ‘Foetus Factor’; an enduring image from Misha Britna (on his first ever poetry slam attempt) of farting a pigeon out into the dire straits of a gale force wind; Jack Reagan’s rhythmic warnings of the perils of reading the small print in a packet of medication; Sophie Hall’s disdainful diatribe against the dastardly Davina McCall; Ben William’s dramatic despair at his discovery that the object of his affection was none other than the second female pope; Ed Kengai’s sometimes bewildering, often giggle-inducing concoction covering everything from orgies to bankers; and the winner of the night, Tony Walsh, and his confident, risqué depiction of the alcohol-fuelled decay of an office Christmas do from hell.
Julian’s banter and occasional contribution of his own poetry kept the momentum going at pace all night, while a guest performance of the superbly talented Marvin Cheeseman kept everyone in stitches during a half-time interval. If you’ve never come across his work before, I advise you to browse his website and look out for such gems as he performed on the evening as ‘Primark: the rumble in the jungle’, ‘The wholesomeness of Coldplay and their fans’ – and, of course, the short but sweet ditty that no born and bred Mancunian could resist:
We all have our dreams, and they sometimes come true:
Liverpool 1, Blackpool 2.
The mixture of structures, styles, experience and deliveries by the participating poets all added to the depth of the evening’s experience – as did some good-humoured, but heartfelt, booing at the harshness of the judges – and I left with a light-hearted (if still somewhat crippled) step, some unforgettable rhymes ringing in my head and (courtesy of Tony Walsh’s final poem on the triple evils of sex, the internet and confectionary) a vision of the possible uses of Monster Munch that I never want to sully my imagination with again *shudders*.
Rowena Forbes is a freelance copywriter, editor and journalist who dabbles in short stories and might even consider penning a poem or two in the future, once she gets over her foolish fuss about the 111 bus.
Posted by MLF Blog at 11:11 AM