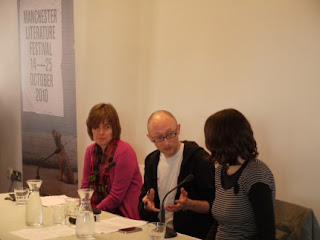 24th October
Talk of the Rainy City seems somewhat out of kilter today as bright sunshine streams into the new Cornerhouse Annexe through its floor-to-ceiling windows. The turnout is still keen on the penultimate afternoon of Manchester Literature Festival, where Rainy City Stories was launched two years ago. Having already submitted a poem to the website and taken part in one of the regular writing workshops run by the project, I’m looking forward to gleaning further Writing About Place tips from this discussion between some of the more well-known contributors.
Festival Director Cathy Bolton provides a brief background to the “interactive literary cityscape”, then hands over to the panel’s chair; author, Nightjar Press publisher and MMU lecturer Nicholas Royle. Nick is flanked by novelists Jenn Ashworth and Clare Dudman, and kicks off by inviting each in turn to step up to the lectern and read extracts of their work.
Jenn’s first novel, A Kind Of Intimacy, takes Lancashire fishing town Fleetwood as its backdrop, while her second, Cold Light, moves down the coast to Preston. Telling the story of two teenage girls, Jenn explains the importance of outside settings and space in this novel, which is due out next summer. Too young for pubs or clubs but too old for staying at home and keeping out of trouble, the characters take to hanging about in parks and other public places where they can drink and snog in peace. Jenn draws a link between the wildness of the teenagers’ behaviour and the wildness of the nature reserves (“where urban people go to look at grass”) they inhabit.
A little further afield, Clare’s novel, A Place Of Meadows And Tall Trees, is set in Patagonia, and her reading follows the story of Welsh settlers Silas and Edwin. Physical descriptions of the scenery play a big part in Clare’s narrative, with the two men trekking to a place where a perilous precipice overlooks a large lake extending into the distance. She describes a tangible tension, with man pitted against the environment, almost as if the landscape is a character itself. She also admits that perhaps she has an ulterior motive for choosing far-flung places as settings in her books: research provides her with the perfect excuse to go and visit!
Nick reads part of a novel that he is in the process of building up from a short story idea. The narrator, like Nick, teaches creative writing, lives in Nick’s house (albeit with a slightly different layout), sees what Nick sees and goes where Nick goes, which, in this case, is down onto the disused railway line that runs along the back of Didsbury Village. Nick instils in us his love of abandoned places – here the train track, but also dilapidated buildings: “It’s as if the story is waiting to happen; as if you disturb the stories as you explore.”
Each of the three writers is obviously attracted by wilderness in one shape or form, and the discussion which follows takes this as a starting point. Jenn finds wild places dramatically interesting because they are often where people get up to no good; Clare says wild landscapes allow for more interaction and give you the opportunity to let your imagination run free. From this, they discuss how place can be more than just a setting for a story; that it can also suggest a mood or a character.
All agree that it’s important to go to the place that you are writing about in order to immerse your senses and fully appreciate the sights, smells and sounds that can’t be experienced any other way (Clare recounts how, when researching a novel set in Greenland, she got lost but found her way back to the settlement by following the howling of the dogs the villagers kept, and how she wouldn’t have known this otherwise). By having this first-hand knowledge and feeling of a place, you can then evoke it and not merely depict it.
by Sarah-Clare Conlon
Sarah-Clare is a freelance writer, editor and press officer. She is the co-creator of Ask Ben & Clare, author of the award-winning Words & Fixtures, and regular contributor to Manchester Blog Awards 2010 Best New Blog 330 Words.
Posted by MLF Blog at 8:49 AM