Tell the Professor where to go!! 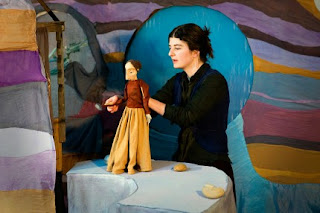 After a long day at MLF on Saturday and an overnight stay in Manchester, I was looking forward to a relaxing Sunday afternoon learning about the unsung heroine of 19th century palaeontology, Mary Anning.

My friend Pete and I arrived at the Manchester Museum just as the One Moment In Time Theatre were setting up the show, putting the puppets and props in their starting positions and walking around the room shaking out their arms and skipping a little bit, presumably to warm up. I was surprised that there were only three women and three puppets in the theatre group, I don’t know why but I was expecting at least 10 real people and at least the same number of wooden ones.

The room was jam-packed – I started off sitting at the back, and ended up with the children on the floor, right at the front with a good view of the ‘backstage’ area and the technical team (one of the three women with a laptop and some basic noise-making equipment). The museum provided rugs and squishy round pads for the children to sit on and the mums and dads sat on the chairs. It was intimate and comfortable.

The handmade set was very pretty. It consisted of three separate pieces – all covered with silky and layered wave-like fabric in blues, purples, greens and yellows. A stand on the front had a selection of stones and fossils ready for discovery.

So, on with the show.

Set in the 1880s and beginning at the beginning, the young Mary and her dog are on the beach, looking for fossils, or ‘snake stones’ as they call them. The scene is calm and happy as they play on the beach while a song is played, telling us how Mary was born by the sea into poverty at Lyme Regis, the daughter of cabinetmaker and part-time fossil-finder Richard, and housewife Molly.

We learn about her past, how she narrowly missed death as an infant when lightening struck a tree, killing her three minders but leaving her unscathed. This gives the impression that Mary is special, gifted perhaps. Mary's parents are supportive of her passion for fossils and news travels of her findings. We meet the very posh Professor Buckland from Oxford University who comes to purchase some some of these treasures.

Tragically, her father dies – a terrible loss for the family who rely on the cabinetmaking business for survival. With the flip of a sign, the shop turns into a Fossil Depot, from which the fossils are then sold and a new business grows. When her father comes to her from the dead on the beach in the form of a piece of flying driftwood, the performers begin to sing about history and its immense vastness. The children on the front row are engaged and interested.

Then Mary and her dog make a huge discovery – a pointy scull in the sand. As the purple and blue drapes of the handmade set are removed, we understand the item’s significance. We are told that it’s the first complete Ichthyosaurus skull. Mary sleeps next to it that night and dreams of walking around its head, through it’s eye sockets and out of its mouth. She loves it.

News of the skull travels fast, and the next thing we know, the Professor is there to buy it and take it to London. There he will unveil it to the academic palaeontology community. Great! Only, Mary isn’t allowed to go – she’s a woman, and these meetings are for men only! How utterly unfair and disappointing for her!

The show ends with Mary’s mother telling her that she too will be famous one day, just like the Ichthyosaurus skull. Perhaps this would have cheered her up, but I know it wouldn’t have worked for me!

The performers were fantastic. The puppets were a lot smaller than I expected and their human operators were much more visible. I thought this would make it harder for me to suspend my disbelief, but it didn’t at all. They are clearly very well practiced, as they moved the little bodies and wooden heads smoothly – they looked very human-like. My Grandma had a collection of strange bird puppets which I tried to play with once – it’s VERY difficult, so I was impressed!

The set was well made and simple. The cabinetmaking shop had a dolls’-house feel to it and the whole scene was dreamy and calm. My favourite bit of the set was a hole in the only stationary piece of furniture - the backdrop. Occasionally this hole was revealed and with the switching-on of a lamp and the clever use of cut-out card on the end of bendy sticks, stories were told in silhouette. Moving images of Mary as a baby, the lightening striking her minders and the burial of her father were beautiful and effective.

Overall, the show was great. The children were engaged for the majority of the 50 minutes - especially during the outbursts of song and music. The only disappointing thing was the story itself! I wanted to hear how Mary had overcome being female and excluded and I’d hoped it wasn’t just by getting on with it. I wanted her to keep her Ichthyosaurus skull and tell the Professor where to go!!

One easy way to decorate a nursery is to use an image from art history. Many western painters have painted for children, such as this painting, by English artists Stanley Spencer, http://EN.WahooArt.com/A55A04/w.nsf/OPRA/BRUE-8LT7RP , should look good on the nursery wall.
It's available as a canvas print of any size to be delivered to your home, from wahooart.com. It's affordable too.