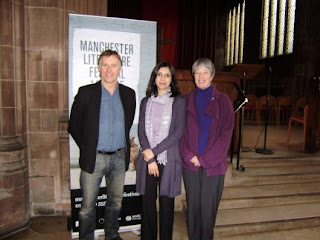 21st October
The Manchester Cathedral’s Religious Poetry competition is in its twelve year, and is an opportunity for poets of every faith and none to compete for a £400 prize. As organiser Rachel Mann informed us as she opened the event, this is a competition that focuses on the spiritual essence of religious faith, on how it informs and affects every aspect of our lives. As such, the competition has been won by individuals of every possible faith, including a Jewish winner, a Buddhist and a Muslim from Katmandu.
Canon Albert Radcliffe, who is stepping down this year from running the competition, gave us an insight into its original foundation. Advised as a young pastor “not to have too many good ideas”, he had then gone on to set up the competition when he arrived at the cathedral. Each year, the competition has grown, and makes a small profit that is donated to the Booth Centre for the Homeless. This year’s donation was £600.80. Past judges have included Archbishop Rowan Williams and Professor Michael Schmidt of Bloodaxe Books.
This year’s presentation event was held in the echoing cathedral itself, with a buffet and celebratory wine provided for the occasion. The highly-respected poet Vona Groarke acted as judge, and offered a reading of a very varied selection of her own work, including the surrealist sonnet “Family”, and the intriguing “Oranges”. This was followed by the presentation of awards to the runners up, winners and first prize. The first and third place winners and one of the runners-up also gave readings of their work.
Nabila Jameel, one of the commended poets, spoke first, offering congratulations to the other competitors and winners. Her work is inspired by her Islamic faith, and she seeks to use her writing to de-mystify a religion that is currently highly controversial. Her poem “The Last Prayer” describes the wealth of the afterlife and the power of love.
Helen Evans then read “Night Crossing”, the second place poem, a short but intense piece of work. A features writer from Exeter, she has just completed a one year course in creative writing and has demonstrated that she has learned well. The poem itself was inspired by crossing to the tidal island of Lindisfarne. She says that the “poem’s further meanings are in your hands.”
The overall winner, John Lindley, is no newcomer, having been 2004 Poet Laureate of Cheshire. He has appeared at the Edinburgh Fringe, and teaches creative writing workshops to a variety of groups. “Annunciation”, his award-winning poem, opens with the arresting line, “You come with your bad news ticking in your mouth”.
Finally, Canon Radcliffe gave his farewell speech, keen to emphasise both the international and the interfaith nature of the competition. This year they received over 900 entries from more than 300 poets, sending in from as far afield as New Zealand, Australia and America. Despite complaints, the competition has remained one that is concerned with faith of all kinds in every day life, rather than being strictly Christian or doctrinal. As a well-respected poetry event in Manchester, which has become the UK’s “second city of poetry”, this is definitely one to consider entering, whatever your level of experience.
by Joely Black
Joely is a freelance writer and author who writes epic fantasy and drinks large quantities of tea. Two of her books, The Execution and The Inheritor, are available as ebooks from Smashwords.
Posted by MLF Blog at 11:35 AM