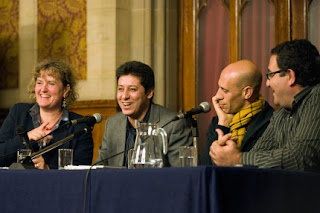 Beirut 39, a long-awaited enriching event, held on Tuesday evening at the impressive Manchester Town Hall. As I set foot in, I’m stood in awed stillness before the extravagant Town Hall entrance. I attempt not to appear too amazed, though I can’t resist taking glimpses of the ornate architecture; my eyes trace the sinuous curves of the arches and the intricate detail of the elegant surroundings (creating a classic sense of stepping back in time).

As I ascend the spiral staircase, I am led to the Lord Mayor’s Parlour; a luxurious room furnished with ruby red carpet, velvet chairs and encircled by portraits framed in gold. Manchester Literature Festival has certainly selected a memorable venue for our first-appearance guests of honour; Yasin Adnan from Morocco; Ala Hlehel from Palestine and Abdelkader Benali from the Netherlands.

For those who are unfamiliar, Beirut 39 is a unique and exciting anthology, presenting a keyhole into the contemporary Arab world; expressed through the eyes of thirty-nine freshly talented, award winning Arab writers. Collectively, the extracts attempt to unlock the keyhole, revealing the inner voice and presenting a real reflection on the contemporary day-to-day Arab life.

On arrival, visitors crowd around the Waterstone’s bookstall, making sure they grab their personal copy of Beirut 39.

Meanwhile, some visitors promptly head for a comfortable front-row seat. Cathy Bolton does the honours, she briefly explains the event is organised jointly by the Manchester Literature Festival, in association with Literature Across Frontiers. Cathy swiftly hands it over to the chair, Claire Armistead (Literary Editor of the Guardian) who warmly welcomes the three representatives of Beirut 39. Before the guests can shed any light on their account, Claire points out that Beirut 39 is written originally in Arabic and translated in English by Samuel Shimon.

First up is Ala Hlehel, a Palestinian award-winning writer. The audience listens intently as Ala presents his reading of “The story writer”. Absorbed, we learn that Ala’s story is deep-rooted in political conflict and culture. I’m deeply moved by the poignant ending as are others in the audience. The protagonist gets an inspiration to write after his moment of revelation; “It’s not right that you’re a school boy and do not carry a pen.” Claire reiterates, "Ala writes about normal people in extraordinary situations.”  Next, we have Abdelkader Benali, a Morrocan-Dutch award-winning writer; the mood is lightened as he, in good spirits, stands up and pronounces, "I’m glad to be here!.” He presents an avid reading of his not-so-joyfully titled piece "The trip to the Slaughterhouse" – his account about siblings focuses on the theme of gender differences with undertones of domestic violence. Abdelkader adds that his story has some personal references; the confident personality of the girl reminds him very much of his own sister.

Out of the blue, the audience is interrupted with a high-pitched musical sound from another room. At ease, amid the hubbub of sudden laughter, Abdelkader proclaims, "Thanks for the music!”

Last but not least is the Morroccon award-winning writer, Yasin Adnan. Yasin presents his reading from Two stories: "Small talk on shades of White". Whilst reading, he pauses a little, reminding the audience that he is, “Reading in English,” although he speaks very little of it. We learn that his story, like Abdelkader’s, is also focused on the theme of gender relations (seems like it’s a recurring theme for the Moroccans).

Claire invites members of the audience to ask questions. There is a natural flowing discussion between the three writers who mutually agree; although the themes of their work may be on serious issues, this is balanced by adding humour, sometimes a caustic dark-humour.

Ala Hlehel, the Palestinian writer, admits: “If reality is miserable then you have to write with some humour, otherwise I will cry in my stories!”

Abdelkader explains he uses, “Humour as a tool to make his writing go faster.”

Yasin adds further, “Irony is a system of thinking.”

Overall, Ala Hlehel’s first-hand perceptive account, on the reality of living in a conflict-land, certainly stood out. What a privilege to hear the Arab perspective from the Arabs! Indeed, Claire aptly concludes the evening with some food for thought on 'co-existence': “Only the wearer knows where the shoe pinches.”

Nazia is a teacher of English in Lancashire with a keen interest in exploring diverse cultures.