“The Richard Dawkins in Colin Firth’s jockstrap” and other stories 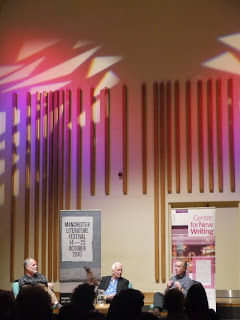 On Monday, 11th October, Martin Amis and BAFTA-winning screenwriter Andrew Davies took to the stage for another MLF warm-up event, presented by The Centre for New Writing at The University of Manchester, to discuss the impact of Literature on Film. Guest blogger Jennie Shorley was there to witness this very special event. Here's what she made of it:
The University of Manchester’s wonderfully named Cosmo Rodenwald concert hall is large enough to stage a symphony orchestra. But tonight it hosts just two literary luminaries; the infamous Martin Amis and Andrew Davies, screenwriter and adaptor of THE Pride and Prejudice, Bridget Jones, and more importantly to this audience member, 80s kids TV series Marmalade Atkins.
Martin Amis is professor of Creative Writing at the Centre for New Writing at the University of Manchester. He is a critically acclaimed novelist and thinker, and named in The Times’ 2008 list of the 50 Greatest Writers since 1945. He is famed for acerbity and dyspeptic criticism, so we are expecting some fireworks.
Through the audience’s anticipatory hubbub, there is division of opinion as to what tonight will hold – academic fight, intellectual love-in, or deep praise of Clueless?
Both men are introduced with great praise; Andrew Davies as the “most renowned practitioner of adaptation in our times” followed by a list of his Emmys, Baftas and British Academy Fellowship. Amis is similarly acclaimed, for his university colleague “one of the best things about being around this university is bumping into him”.
Amis sets out his anecdotal stall from the beginning; we will not hear discussion and argument, but rather Ronnie Corbett-esque tales from the writer’s chair. He is obviously the home-team and the opener for Davies as the visiting act; although his literary prowess and reputation are no less impressive for that, and his drawling insights soon draw laughs from the audience.
He has, we learn, interviewed Steven Spielberg, Sydney Lumiere and Brian de Palma; the latter did not go down well, and received an acidic review. Amis has also written science fiction for film, including Saturn 3, starring Kirk Douglas, Farrah Fawcett and Harvey Keitel. Jokes run through this narrative, peppered by warning against the lack of literary freedom, both commercial and collaborative, when writing for film.
Running through Amis’ memories is the distinction between his creative Englishness and the brash commercial interests of Hollywood. Movie stars appear to hold a general obsession with nakedness; we hear of Kirk Douglas’ demands for nude and sex scenes, and Harvey Keitel being uncomfortably comfortable with his top off in meetings. There is a real sense of delicate art being crushed, but also a palpable sense of excitement and awe at meeting the stellar personalities of Hollywood film; we hear that Travolta has a limousine to travel 10 yards to lunch.
Andrew Davies agrees with the lack of importance of the author in Hollywood, and follows in the same vein, with stories of evil agents and fawning producers claiming, “we haven’t read anything he’s written, but we love it”. His nationality dictates that he is plied with wine (apparently we all drink a lot of it…), until he sends the first script through, and they want to dump him.
Davies briefly discusses possibly his biggest movie hit, Bridget Jones, and rather neatly proves his own point about the writer’s unimportance by forgetting the name of its author. He then moves on to what seems to be the much more comfortable and enjoyable ground of TV adaptations, and in particular, 1995’s Pride and Prejudice. The contrast is dramatic; here as an adaptor, he has “not total autonomy, but (is) the lead person.” He was motivated to undertake the project by outrage at others’ bad adaptations of the novel, and strongly believed in bringing out the sexual attraction between Mr Darcy and Elizabeth, including the wet shirt scene; the defining image of the series.
And sex is once again a theme of the anecdotes; Davies describes P&P as a “pre Darwinian novel”, Darcy’s rationality failing under the evolutionary weight of sexual desire for the vibrant Elizabeth. Davies terms it “the Richard Dawkins in his jockstrap”.
Both men clearly love Austen; their dialogue about readings of Emma and Pride and Prejudice inspire me to re-read the whole corpus; personally, it is the most engaging part of the show.
As the lights come up for questions, the intimate fireside story element is lost. It is clear that many audience members are amateur writers, eager for sound advice from industry professionals.
Overall, the event is not at all what I expected; the exchange is one of friendly, funny anecdotes, and not what I had anticipated from Amis. His anecdotes are peppered with lament for the role of the writer in film and television, and a simple love of literature and its creative art.
As Amis terms it, the “god-like freedom” of the writer may be trampled by crazy demands from Hollywood stars, but as both men have proved with the laughter rippling the audience from their anecdotes, sex sells.
Jennie Shorley studied Classics and Ancient World Studies at The University of Manchester and works for Manchester Metropolitan University Business School.
Posted by MLF Blog at 4:23 PM