Family Secrets – The trials and tribulations of a deranged public 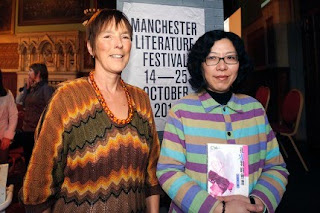 19th October
Though she is given a microphone, Chinese short story writer and poet, Ding Liying, is barely audible as she begins reading her featured short story, Family Secrets. The story's English translation is projected on to a screen and the audience holds its collective breath in order to hear her unfamiliar sounds and try to piece together the correlation.
And it's difficult: it's possible to understand the intention, the emotion, of other European languages of which I don't have any knowledge, but I find it impossible to know where in the story Ding Liying is currently reading.
Nicky Harman, who has translated this piece amongst many, many others, agrees. Prompted by a question from the audience, we learn that translation cannot be attempted without a full grasp of cultural context - though British, Irish and American literature is very popular in China, Liying explains. Her favourite is James Joyce's The Dubliners, which lends to a comment that there have been two translations of Ulysses in recent years, one of which took over ten years to complete.
Wild Swans-type literary trends, plus the assumption that Chinese arts are stifled by state censorship (as is touched on in the question and answer session), has perhaps given rise to the assumption that Chinese literature is austere, heavy-going, politicised, concerned with toil and struggle.
But here we are presented with Liying's hilarious account of a newspaper agony aunt, forced to listen to the trials and tribulations of a deranged public. A young woman threatens to jump off Shanghai's tallest tower; the agony aunt tells her the tower isn't complete yet. A man calls to ask whether suffering with gonorrhea is similar to that of suffering with a common cold, and our protagonist is left speechless.
However, the audience is left on tenterhooks at the most poignant moment of the story - the most developed character has been introduced, and we have to wait a couple of days before the final story will be posted on the Manchester Literature Festival website.
The audience are noticeably disappointed, especially as it is clear this event is flying by at tremendous speed, but inevitably they will welcome the return journey into Ding Liying's world when they arrive online at her completed story.
by Sophie Parkes
Sophie is a literature and folk music enthusiast who runs a folk music night and blog not-so-wittily entitled, For Folk's Sake
You can now read the whole of Ding's translated story on MLF's Commissions page.
Posted by MLF Blog at 4:21 PM