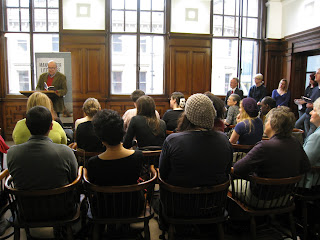 What’s the number one piece of advice given to aspiring writers?
Watch, and listen. Or, to put it more specifically: eavesdrop.
Countless writers have used the clever, odd, funny or even mun
dane quips of strangers as inspiration, but never as obviously as this. The Bugged Project finally brought the secret out into the open with a challenge for writers both new and established. Their mission, should they choose to accept it, was to listen out on July 1st 2010, and use something they heard as inspiration to create, whether it be poetry, fiction, scripts or flash fiction.
The result, the Bugged book, was launched in the packed Becker Room of City Library on Deansgate. It was the first official event of the Manchest
er Literature Festival, and despite it being a lunchtime, the launch packed out the oak-panelled room on the first floor, and not just with writers who had participated and submitted work.
A varied and lively audience was introduced to a selection of participating authors by writer Jo Bell, who made a very entertaining compère and kept the event ticking along at a cracking pace without spoiling our chance to appreciate the work itself.
After a brief introduction, several authors were give
n an opportunity to read their work. At some anthology launches, this might have placed the spotlight on the big and recognised names, but Bugged is different, giving as much attention to those who had had their work published for the first time in the book as to those more familiar authors in the collection.
It wasn’t just the writers who were varied in their experience. Having set out with a broad brief, they had taken everything from the funny, the outrageous, even the mundane, and transformed it into excellent writing.
The varied nature of the event meant there was never a dull moment, and the audience was kept keen by a tight timetable of three minutes per author. We were given a glimpse of the delights in the book by authors who proved to be just as good at speaking as they are at writing. From the regal Dorothy Burgess, reading her poem inspired by neighbours’ conversation, to the lively Cathy Bryant and her inspiration from “love, death and public transport”, each writer brought something unique to the event, including, in Jenn Ashworth’s case, a baby to provide punctuation to a story set in a maternity ward (presumably not a prop). 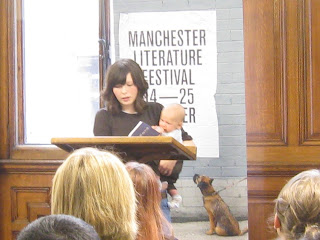 Eavesdropping had taken place in all manner of different locations, covering all manner of subjects, and demonstrated that the most unlikely sayings can provide inspiration. Alicia Ogg, a first-time author, had used a simple response overheard on a train to inspire a short story with an incredible, unexpected twist including a suicide. All this from somebody talking about putting pork chops out to defrost. Emma Morgan, on the other hand, spent the day at an airport and had turned the mission on its head, choosing to describe and invent stories about the people she had seen waiting in the Arrivals lounge rather than recount something specifically overheard.
Stories were sourced from all manner of daily events, proving just how varied life can be. Ian Marchant, an established writer who has run the Arvon Centre and written the travelogue “The Longest Crawl” about the ultimate pub crawl, offered the audience not words but music. His story detailed a couple coping with a twenty-something neighbour obsessed with Fleetwood Mac. Phil Williams, on the other hand, gave us the reportage of the neighbours’ teenagers trying to get into their house without a key.
The creations themselves were each as different as the authors. We were treated to a tale of murderous friendship from Callam Kerr, coffee shop dating from Lynsey May, humour from Cathy Bryant and Emma Morgan and tragedy from Alicia Ogg. It made for a very unusual event, breaking from the tradition of the book launch offering the chance for a single author to read an extended passage. The snippets stirred very different responses and made for light relief. A friend who’d come with me immediately purchased the book afterward and said he would have to spend the afternoon reading, since he’d been hooked by what we’d just heard.
It was an excellent way to kick off the festival, and a great way to spend a dreary Thursday lunchtime in Manchester. True to Jo Bell’s stated mission, we all listened very hard, and we definitely had a “bloody good time”.
For more information on the authors and to get the book, check out the Bugged site here
Joely Black is a freelance writer and author who writes epic fantasy and drinks large quantities of tea. Two of her books, The Execution and The Inheritor, are available as ebooks from Smashwords.
Posted by MLF Blog at 2:45 PM

If Cathy Bryant's poetry sounds intriguing, please come along to the launch of her book this Thursday, 21st October.

It was a great launch! Well done to all those involved. I mentioned this post here:
http://powerisastateofmind.blogspot.com/2010/10/bugged-launch.html