Magma is a hot ticket for poets and poetry fans 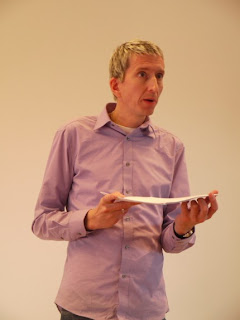 I have it on good authority that certain factions in the poetry world can be a little, shall we say, unapproachable. The editors and writers of the poetry quarterly Magma couldn’t be further from this description. A very smiley Clare Pollard briefly explains the purpose of the magazine – to support and publish new as well as established poets – and encourages any writers in the audience to submit work for consideration.

She then welcomes Jacqueline Saphra to the “stage” with a précis of Jacqui’s poetic career: her award wins include first prize in the Ledbury Poetry Competition and her collection The Kitchen of Lovely Contraptions (Flipped Eye) follows the pamphlet Rock’n’Roll Mamma (Flarestack). We are treated to seven very varied pieces, from the short and sweet My Mother’s Vocation (humorously rhyming “parts”, “hearts” and “foreign tarts”) to the slightly longer ode to “tall as totems” asparagus, Last Harvest. She also reads Seventeen And All That Shit, a piece about perceived ugliness that appears in the November issue of Magma Poetry, tying into its theme of beauty.

Next up is Alan Buckley, working towards his first collection after Shiver (the tall-lighthouse) was named the Poetry Book Society pamphlet choice for summer 2009. He opens with Peaches, which has already appeared in Magma and includes some lovely language; “doped with syrup” one such example. A second Magma appearance is Tinker Tailor Soldier Spy, which Alan explains, in one of many snippets of anecdotes, is a found poem (this one from the blurb on the back of a DVD boxset).

The third reader is lecturer Sarah Jackson, who gives us Vanishing Twin from her pamphlet Milk (Pighog Press), shortlisted for the prestigious Michael Marks Award last year. I really enjoy the incredible imagery of Clam, rustled up during a writing retreat in Scotland, particularly the line “snapping the clams like children clapping”. The more recent It Shined, written while on holiday in Brittany, she divulges, is rather more disturbing, as is the similarly grammatically challenged (a current obsession for Sarah) The Most Quiet, although the wordplay here keeps it from being too intense.

Clare Pollard (herself a distinguished poet, with three collections through Bloodaxe under her belt, including Look, Clare! Look!) returns to the front of the bright and airy new Cornerhouse Annexe (a sorely needed space and much used since its opening) to discuss Magma Poetry further with co-board member Jacqui and to field questions from the floor.

The MLF events I've squeezed into so far (packed houses all round) have incorporated as much fascinating production detail as they have incredible reading, and this was no exception. We discovered that the magazine was the result of a night class and is run as a collective, with a board and rotating editors, all volunteers. This helps keep the project fresh and provides different voices, different angles and different opportunities each edition for budding contributors. “We’re a broad church,” says Clare and indeed the March issue, edited by Julia Bird, takes the theme “knock it down”; Clare has picked “journeys” to guide the one she helms for June. The magazine relies on submissions, of which it receives a staggering 2,500 at each foray, and, to stand out from the crowd, Clare suggests being arresting, entertaining and amusing. “I like a joke,” she laughs, and we all join in, much enthused by how down-to-earth the approach taken by the team behind this leading literary tome is.

Sarah-Clare is a freelance writer, editor and press officer. She is the co-creator of Ask Ben & Clare, author of the award-winning Words & Fixtures, and regular contributor to Manchester Blog Awards 2010 Best New Blog 330 Words.