Two for one tales 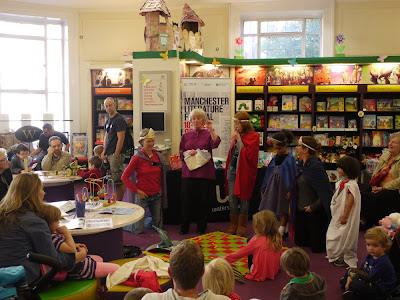 It's stories galore on this warm October afternoon in the Children’s Department of Waterstone’s Deansgate, with books almost jumping at you from every wall; setting the right atmosphere for what is to be a fun and lively event. On entrance we are warmly welcomed by Margaret Ryan’s brightly lit smile as she sits comfortably behind a display of her recent works, which families are circling around. I manage to have a quick conversation with Margaret. Previously a primary school teacher, Margaret tells me she gave up teaching to become a children’s author. Writing is a hobby which “grew and grew”, she explains, till she decided to take it up as her main profession.

Now, as the carpet space fills up, Margaret gets ready to address her enthusiastic family gathering of children and parents alike. Some are sat cross-legged on the soft purple carpet, while a few are gathered around the table. Margaret begins by taking us through her journey and process as a children’s author. So how do ideas enter an author’s mind? Carefully taking off her glasses, Margaret remembers how a random conversation about pet names with a colleague intrigued her to write the Fat Alphie And Charlie The Wimp series. She found that her colleague’s pet names had something very “magical” about them which would appeal to children.

Margaret now presents us with a lively animated reading of Fat Alphie In Love. Brilliantly, she shifts her voice from a high-pitched singing tone to a low and gentle voice. Enthusiastically, the families join in together and the momentum picks up with the repeated sighs; everyone takes in a deep breath before Margaret reads the next line, “I’m in love with Lola!” Together everyone lets out a loud "sighhhhhh"! Noticeably, we are all warmed up and it is clear that repetition is a useful tool for children’s stories, especially for a bit of family storytelling fun; bringing everyone together. But before Margaret moves on to her next reading, a puzzled-looking lady impatiently asks, “Excuse me: does he get Lola in the end?” Left on a cliff-hanger, we are asked to read the rest to find out.

I’m sure we all must remember the familiar family story ”There were 10 in the bed and the little one said: roll over...” This is the idea for Margaret’s The Littlest Dragon series. The Littlest Dragon is the youngest in a family of 10 dragon brothers and they all sleep in one big dragon bed. However, the littlest dragon wants to get rid of the other nine dragons so he can have the bed to himself. Margaret explains this series, with a familiar family theme, is aimed at beginner readers.

Next, with the help of the lively audience, Margaret presents her most prominent work Roodica The Rude And The Famous Flea Trick. This is one of Margaret’s first books to be selected in 2011 for the Richard and Judy Children’s Book Club. As roles are allocated to both parents and children from the audience, it is clear that Margret has prepared for the fun element of her visit. She has even gone the extra mile by bringing in clothes and props to help dress up and bring to life each of the characters in her story.

The question and answer session that follows further explores Margaret’s journey as a children’s author. First question: how long does it take to get an idea transformed into a book? “It ranges from five to six weeks to a few months.” For instance, her Weird Street series was instigated while waiting at traffic lights. Margaret noticed the name Weird Street, consequently, her creative mind began exploring and questioning; who lives in Weird Street? Next: what is your favourite book? “That is a hard question because you end up liking all the characters including the baddies.” However, Margaret is fond of her Canterbury Tales series as they are personal stories which relate to her own children.

Clearly there are many joys of being a children's author; enabling her to write and still be involved with children. Margaret has also just finished her first book for adults. The event comes to an official end as the audience gives a big round of applause. What a great fun event, leaving us all smiling with fond childhood memories. As families we depart, taking away fun reading ideas, I also feel inspired: to take back some fresh ideas into the classroom. 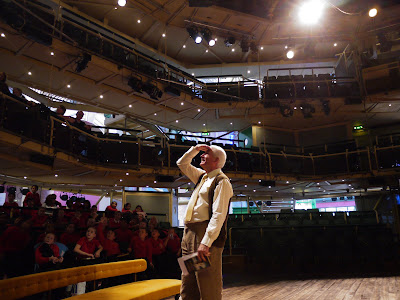 There is a real sense of excitement as I arrive on a cool, clear October morning at the remarkable Royal Exchange. Children liven up the atmosphere as they scurry around in their red, green and blue school uniforms while enthusiastic teachers frantically direct them towards the theatre entrance.

As we settle into our seats, the lights dim and it’s so hushed you can almost hear a pin drop. Under the spotlight, the stage is set with what resembles a comfy lounge: we have a brown leather sofa next to a side table with a small pile of books spread across.

“Life is long and time is short,” begins Kevin Crossley-Holland, one of the UK’s most acclaimed children’s authors, in his reflective tone.

At the age of 70, Kevin has many stories to tell and retell as he explains the three stepping stones that led to him becoming a writer: “Moments that are key minutes in your life that bring me here to you.”

He admits he had never read a book until he was 11 years old. But it was an “electrifying” Saracen shield that transformed him to tune into his senses, allowing the object to tell him a story. The second stepping stone, which actually took Kevin by surprise, was an old pot he chose to keep in memory of his grandfather, only to later discover that it was a unique hidden treasure, a missing Anglo Saxon piece. Kevin’s passion to learn and speak Latin while studying at Oxford University directed him to his third stepping stone. In his own words, Kevin describes the sound of the Anglo Saxon language - “Like waves running up a stony beach” - making him fall in love with Anglo Saxon writing.

Kevin, a natural storyteller, sheds some light on his career journey. He steadily gives details about how he sacrificed his publishing job to camp in Iceland. This journey inspired him to spend the next four years writing and retelling the Viking myths. As each story unfolds and another one begins, Kevin takes us through a visual journey presented using a slideshow of images from Norway and Turkey. The faint background music further enables the audience to capture his imagination. Captivated by the image of the Hagia Sophia museum in Istanbul, formerly a masjid and church, Kevin explains how this visit inspired him to write his recent novel Bracelet Of Bones. During this visit he saw a carving of Viking runes leading him to write the story of Solveig, a Viking girl who makes her journey from Norway to Turkey.

Kevin now gives an avid reading from a passage in Bracelet Of Bones. His voice and calm manner leave the audience spellbound. It is amazing to see how the children, some astonished and some eyes glued to the centre spotlight, are all magically listening.

Kevin ends the event with some wise words of encouragement, “If you can make music with words and pictures with words, you can write!” He further adds that he will keep on writing stories: “I’ll never stop but I’ll be stopped by old age.”

Kevin is a truly extraordinary storyteller with a difference and The Children’s Bookshow presents a truly entertaining event. I leave comprehending that everything and everyone has got a deep hidden treasure - full of stories.

Nazia Bashir is a teacher of English in Lancashire with a keen interest in exploring diverse cultures. She also blogged for Manchester Literature Festival 2010.
Posted by MLF Blog at 1:00 PM