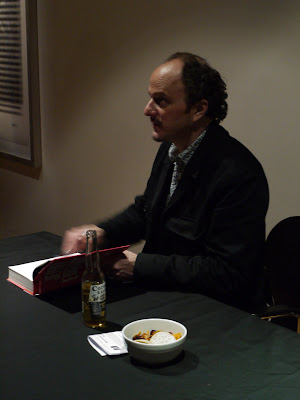 About 150 of us are sitting in rows in the South Gallery, and with Jeffrey Eugenides standing at a lectern, we could be in a lecture in The Marriage Plot. But we aren’t. We are at the final MLF event, which is also one of Dave Haslam’s Close Up interviews.

Eugenides introduces his third novel, The Marriage Plot, by recounting how, just a few minutes ago, a "young journalist" had interviewed him for Creative Times told him that in a seminar in critical theory she’d sent romantic notes to someone in the class, using quotations from Roland Barthes' A Lovers’ Discourse. I glance at the "young journalist", who is sitting next to me in the audience; she is hiding under her hair.

At the beginning of the novel the "heroine", Madeleine - a devotee of 19th-century fiction - is attending a course on semiotics and writing a paper on Barthes’ A Lovers’ Discourse, while falling in love with another student, Leonard. Is this life copying art or art into life? Or being written by the discourse of love? In any case, Eugenides reads the section about Madeleine and Leonard falling in love, and ends with the moment when she announces she loves him, only to have Leonard force her read from A Lovers’ Discourse: "Once the first avowel has been made, 'I love you' has no meaning whatsoever."

Jeffrey Eugenides is an excellent reader. We could have listened to him for hours, possibly days, but with Madeleine throwing A Lovers’ Discourse at Leonard’s head, he closes the book and sits down on the chair next to Dave Haslam. Dave doesn’t ask about writing love stories, plots or semiotics. He goes straight to what audiences always want to know about: the practicalities of writing. Eugenides reveals that he writes every day from 10 til dinnertime; you can’t wait for inspiration. The secret, and this is what we are waiting for, is growing the flesh on your backside you need to develop to become a scholar. Is it hard to sustain the tone while writing a novel, asks Haslam. Sustaining it is easy. It’s finding the tone that’s hard. Are there any obstacles? Eugenides’ main obstacle is finishing his novels (on average 10 years). In fact, his editor flew to Berlin in order to take Middlesex away. (I imagine the editor prowling around his apartment, saying, Just tell me where the manuscript is, Jeff.) That’s another thing about Eugenides; he’s a great raconteur, full of anecdotes.

Dave Haslam asks the question no writer wants to answer: is there a lot of your own experience in the novel? Eugenides admits that when he was writing a lot of his memories of college life came back. But, interestingly, the section that "dovetailed" with his own experience was also the most difficult to write (he’d been trying to write about it for 30 years). Like the character Mitchell, he’d travelled around Europe and spent time in Calcutta, but the chapter about this ended up an "ungodly mess" and he had to cut away a lot of his autobiography in order to find the story.

Though the novel is about how to write the 19th-century marriage plot in the 21st century, aren’t things different now, with mobiles, the internet and so forth, to in the 80s? Nope. Nothing has changed. Whether you are waiting for a letter, staying in for a phone call or checking your mobile for a text, the "tumult of anxiety" (Barthes' words) of waiting has not changed. Too true, we all think. Too true.

Dave Haslam moves on to The Virgin Suicides and Middlesex. Was adolescence a fertile time for writing? Yes, he is slowly growing up. Is the "obscure object" in Middlesex from his personal experience? The term comes from a beautiful and mysterious art history major Eugenides and his friends admired at college. They called her "the obscure object" (from Bunuel’s That Obscure Object Of Desire). The day he finished his novel he went for dinner in Berlin and there she was, the obscure object in the flesh. Recently, she turned up at a reading in Toronto with her mother and fiancé.

It’s the audience’s turn. No one says anything for a minute, then a hand goes up: do you put limits on yourself as a writer? Yes, as a young writer limiting his options in The Virgin Suicides made it easier. But his latest novel grew more naturally. He wanted it to be a tightly dramatised book and to explore the characters as deeply as possible. The audience warms up and the questions come thick and fast. What about his next book? Same tone, says Eugenides. Wider canvas. Is Leonard based on David Foster Wallace? Not at all. He didn’t know Wallace when he was writing the character. The best question of the night: do you believe in semiotics or in love? Eugenides says he sits on the fence. He’d like to emancipate himself from delusions but still wants to believe in love. He has been influenced by semiotics, but resisted deconstruction; he still believes a text can convey meaning, and in that way he still believes in love. With the final question, he tells us Middlesex is going to be made into a mini-series by HBO.

We file into the next room for the book signing. Perhaps our "young journalist" and the story of her Barthian love letters will tour with Eugenides in his bank of brilliant anecdotes.

Zoe Lambert is the author of The War Tour, out now on Comma Press.