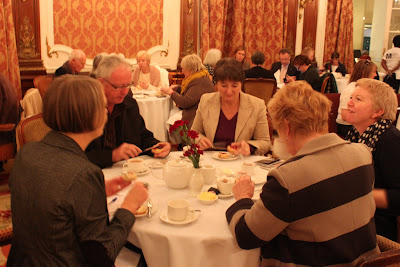 Today's tour of the Midland is held by historian and author Barbara Frost, who's been taking people around this grand building since 1987 and has picked up an interesting tale or two over the years. We meet in the foyer, formerly the Winter Gardens, just beyond the two archways out front that were designed for horses and carriages so that they could deposit their passengers inside the hotel without them ever seeing a drop of local rain. It's easy to be swept up in the historical grandeur of this hotel, imagining as we're guided around touches from the past such as the live orchestra which sat where we now have reception desks.

Built by Midland Railway Company in 1880 in reaction to a rather peevish public who couldn't bear having to walk all the way from the Manchester Central station to Piccadilly in order to find a decent hotel. The erection of the hotel meant that five buildings were demolished, one of which was a gentleman's concert hall where Charles Halle began his career and Chopin gave his very last performance. A condition, therefore, was imposed that the hotel must build a concert hall within its walls. On-site entertainment, a coal fire and telephone in every room, it was all very luxurious - if you forget for a moment that back then guests shared bathrooms.

Although now owned by Q Hotels, there is evidence everywhere of the Midland Railway Company, most notably in the Wyvern. This restaurant is named after a mythical dragon and there is a Wyvern room in every hotel built by the company. Take some time to have a look at the photographs here; they're by Eadweard Muybridge, a man fascinated by the movement of the horse trot. He captured sequential photographs that could be animated much like a flip book and his work here is of the human motion and adorns every wall of the restaurant. Immediately outside the Wyvern the artwork takes a literary turn; extracts from W H Auden's poem Night Mail can be found framed in several locations on the ground floor and serve as a reminder of the mail trains that would have rattled by the hotel. Continuing the theme, the Alexandra ballroom contains plastercast replicas of the building's exterior carvings, including ones of Shakespeare.

In the Trafford Room we learn that the tango was danced here for the very first time in the UK, most likely by film star and gangster George Raft who taught the king and queen a little while later in London. Passing by the Moorish Octagon Room, we move into the French restaurant (pictured), where the Beckhams had their first date and Coronation Street characters Hilda and Stanley Ogden celebrated their silver anniversary.

The hotel is a maze of reading rooms, barber shops, tea rooms, ladies' meeting rooms, basements and sub-basements. Every need is catered for, except, in the beginning, those of the stomach. Architect Charles Trubshaw, a man who clearly had his every meal cooked for him, didn't even consider the need for a kitchen until the last minute and as such they were originally located in a basement level as an afterthought.

Down in the basement, the gym as we know it today, a German restaurant could be found. The original entrance is beautifully covered in Bermantoft tiles which were plastered over during the war to protect them - ironically it was the removal of the plaster and not the war that led to the damaged state they are in today. A waiter working in the restaurant, Hugo, fell in love and proposed to a co-worker named Alice Bradley. The war arrived in England and German Hugo was sent to the Isle of Mann from where he would never return. Alice didn't give up on Hugo and travelled to Germany to trace his family, which she managed to do and found Hugo alive and well, and married to another woman.

Room 247 on the second floor is the home of the Presidential Suite, where the likes of Pavarotti and Princess Anne have stayed; travel two floors up and the suite here has seen such guests as David Cameron. Keep travelling up and you'll find a room that no longer exists. The roof of the Midland was once a garden where guests could take their afternoon teas - Barbara shows the group a photo of an old garden party and it looks as refined and pretty as any party can when located amidst the billowing smoke of the chimney pots! Still, it was elegant enough to host the wedding of Rebecca Marks (Marks and Spencer) in 1910. Look up now and you'll still spot the ornate, white iron fence that surrounded the garden.

Hayley Flynn won Best City And Neighbourhood Blog in the Manchester Blog Awards 2011 for her site, which features the regular Skyliner series, looking at "the secrets above your eyeline". 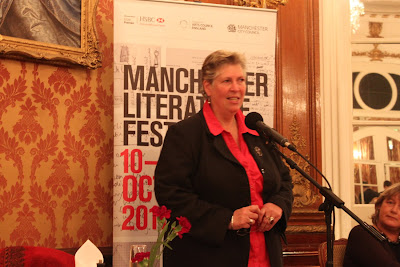 Hearing from Hayley that the second floor of the Midland is home to the Presidential Suite and has hosted guests of somewhat high standing is most interesting: it provides a certain context to author Patricia Duncker choosing to use it for the room inhabited, albeit briefly, by the main character in her specially commissioned short story.

The Madonna At The Midland opens with the rather posh Clarissa Dalloway (yes, the nod to Virginia Woolf is intentional) "cuddling a headache" as she faces the prospect of seeing in her 70th birthday alone in a strange second-floor suite overlooking the rain-drenched Central Library, gazing into "the long sigh of old age ahead". Patricia and Barbara explain to me that Clarissa's suite is located above the conference rooms, which serves to link her back to the public spaces in the hotel, where she spends much of the action, aghast yet also enchanted.

In her introduction, Patricia tells the well-turned-out audience filling the sumptuous, gilded French how, during her four- or five-month spell as writer-in-residence (though she didn't actually live at the Midland), she became intrigued by the inner or personal parts and the outer or shared parts any hotel has. "Hotels are not only very theatrical places," she explains, "they are also quite curiously interlinked - private space and public space. That private space and public space is what interested me the most."

To get a proper feel for the Midland, Patricia was pretty much given the run of the place - "I do declare myself to the duty manager when I start one of my secret raids on the hotel," she says with a good-humoured cluck, something of a trademark. "I have an upstairs as well as a downstairs knowledge of the Midland." Historian Barbara was also drafted in to offer Patricia an insight into the background and gossip from the building and its guests, helping her imagine the story she was gradually beginning to unfold and relating it back to the very specific location.

As well as making particular references in her story to the public spaces of the Wyvern, the French and "the strangely Oriental space of the Octagon", much of the action takes place in the lift and the lobby, where Clarissa finds herself "walled in by smiles" as a hubbub of people, all in fancy dress, are gathering for a birthday party. The guests are "supposed to come dressed up as famous people who stayed at the Midland", and indeed we have Hayley's aforementioned Pavarotti, Posh and Becks, and, perhaps not David Cameron, but his predecessors Gordon Brown and Tony Blair. Knowing what Barbara knows has added an extra depth to Patricia's story of the reunion of two old friends; already a well-written, well-paced and well-received story. Time for tea.

The Madonna At The Midland will be available shortly to read on the MLF website.