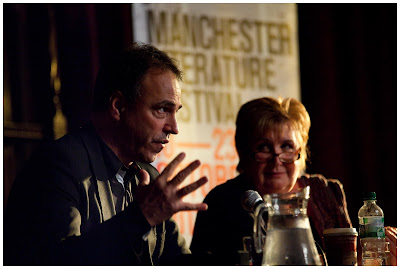 The setting for Manchester Literature Festival's first ‘bookend’ event couldn’t be more apt. Could there be anywhere more perfect for discussing all things Sherlock Holmes on a dark autumn evening than Manchester Town Hall - one of Manchester’s most gothic Victorian buildings and used in Guy Ritchie’s reinvention of Sherlock on the big screen as the Houses of Parliament. No, it’s true, honest. We are here tonight to see Anthony Horowitz, interviewed by one of the Festival’s patrons, Jenni Murray. He's discussing his career but in particular his latest novel, The House Of Silk, which - with the backing of the Conan Doyle estate - sees Sherlock Holmes and his trusty sidekick Dr Watson emerge once more from the fog of Victorian London.

Horowitz starts the event with a reading of the introduction, and (if you're like me rather a fan of Sherlock Holmes, you needn’t be worried) you are instantly drawn straight back into 221B Baker Street; his voice is so close to Arthur Conan Doyle's. When he ends, the packed Banqueting Hall explodes with applause, but everyone soon goes quiet as they put the famous voice of Radio 4's Woman’s Hour to the face of Jenni Murray. She opens the conversation with Anthony by asking why he felt he could write as Conan Doyle. “I wouldn’t have done it if I didn’t think I could carry it of, for I am a huge fan, and in fact I had to write five pages first just to give it a go”, comes the reply, and the game is afoot.

Sherlock Holmes and Conan Doyle’s legacy makes up the first part of the discussion. Horowitz believes the fascination behind them is simply down to "friendship - we all want a best friend like Watson and a best friend like Holmes, it's that simple, and so we want to spend time with them as I always did and continue to do". Horowitz freely admits he did this project because he thought it would "be fun" and "had the story in about 45 minutes of knowing I was doing it", before telling us that there won't be a second Horowitz and Holmes outing because he has "used all the best stuff with this one, and a second would be cynical". Some authors could come off as arrogant with statements like that, but there is something slightly innocent and simply honest in Horowitz’s discussion - a certain open frankness which makes you wonder if that is what calls out to his younger fans.

In fact many of these surround him in the audience (indeed my 12-year-old cousin had begged to come along), and it's nice to see such a mix of young and old. When Horowitz discusses the ending of the Alex Rider series and why as he goes forward as an author - especially now his sons have grown up - the children’s books might slow down, one of the older fans says, "You gave me my childhood escapism - can you please keep doing it for my adulthood too?" It is when the audience gets involved and all the children start asking questions that the event opens up and a less serious side of Horowitz emerges and the author in fact almost lights up. I'm left fairly sure there will be no end to the children’s novels for quite some time yet as they provided such a captive and entertaining audience for the author, it seems.

There is also much laughter when Jenni Murray brings up his TV work, firstly the incredibly successful Foyle’s War and then Midsomer Murders and why Horowitz left. A wry smile appears as he tells the audience: "I had killed everyone off, in fact in my last episode I managed to kill two people off between every ad break, it seemed a little much." It's a question about TV that ends the evening as Murray asks who Horowitz would love to play Holmes and Watson should The House Of Silk be adapted. He thinks about and says: "My ideal pairing would be Daniel Day Lewis as Holmes… and Kenneth Brannagh as Watson - I think that could be the perfect duo." And from the sound of the audience, I think we are all agreed.

You can hear a Sherlock Special plus Manchester Literature Festival Special podcast on Simon's blog The Readers: click here.

Simon Savidge is a freelance editor and journalist, he blogs about all things bookish at Savidge Reads. He is also co-host of Manchester's Bookmarked Literary Salon, co-host of The Readers podcast and co-founder of the Green Carnation Prize. You can follow him on Twitter via @SavidgeReads.
Posted by MLF Blog at 11:15 AM