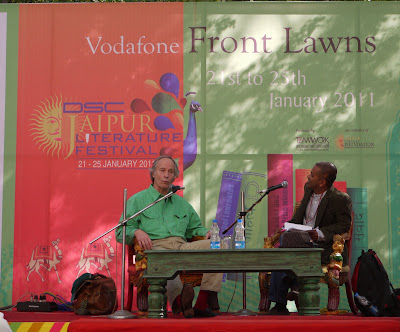 As kites (of the non-avian kind) wheel over the front lawns of the Diggi Palace, Pulitzer Prize-winning American author Richard Ford leans back in his chair on stage at the 4th day of the Jaipur Literature Festival and considers his trilogy of novels, featuring protagonist Frank Bascombe. He points out that it was never intended as a trilogy at all, but, after the success of The Sportswriter, he found he wanted to continue Frank’s story, albeit at intervals of several years (and it may not be over yet).

Ford describes how he began The Sportswriter in 1982, prompted in some part by the death of his mother the year before. His grief was in some sense as he points out ‘transmogrified’ by the novel, in which the main character lives with the death of his child, though Ford points out that he and his wife have never had children themselves. Thus the trilogy was, in some sense, ‘born of grief’. Ford paraphrases poet and writer Randall Jarrell who wrote that a writer is a person who needs to have had experience, though Ford confesses he himself is not keen on actual research. He maintains that being a writer is not hard – if it were, he wouldn’t still be doing it at the age of 66!

Compere media analyst Somnath Batabyal makes the point that modern novels seem to have moved from the ‘heroic’ to tones of introspection, but Ford counters with the fact that some of the greatest novels of the past were those looking at the inner self, by authors such as Tobias Smollett and Flaubert. For Ford, a realistic novel should be saying ‘pay attention!’ to the reader – ‘this is the stuff of life’. Ford says he has used his trilogy to try and write about someone who is trying to be happy, rather than existing at one extreme or another. His characters are seeking some sort of harmony in life, though they may go through periods of unhappiness and even grief to achieve this.

When it comes to the writing of a novel, Ford happily quotes Somerset Maugham: ‘There are three rules for writing, but unfortunately, no-one can remember what they are.’ Ford likes dialogue and argues that this makes for a great introduction to characters, especially as one converses with another. As long as the speech is plausible to the reader, characters can be introduced one after the other very effectively. Ford reveals that he thinks actual descriptions of characters are not as important. Frank Bascombe narrates the trilogy in the first person present tense and so it can be quite difficult for the reader to see what he looks like – only via Frank’s or other characters’ comments are they likely to form an impression of his physical appearance, again highlighting the usefulness of dialogue and character. Besides, Ford laughs, if a character is described too deeply, the reader may be reminded of a friend or relative instead!

Ford grew up in a bookish atmosphere (‘literature was in the air’) and one senses that writing came easily to him. His hometown of Jackson Mississippi was also home to Eudora Welty and William Faulkner, who lived just down the road, and whom he actually met in 1962. Nowadays he and his wife are great travellers and when I ask him where he is most comfortable when writing, he says that he is happy to work almost anywhere whilst on the move – in hotels, on trains, on planes, although he does enjoy some quiet, which he has in abundance at home. He comments to the large audience how happy he is to be in India and says that he has already ridden on an elephant. He enjoys international fiction too, though he regards a novel by, say, RK Narayan as a novel rather than an Indian novel – translated fiction is a ‘gift’ that simply shows how much readers are alike the world over and is not in any way a barrier to empathy.

Ford reveals that his next novel will be set in 1960 and will be called ‘Canada’. It will feature twins whose parents rob a bank and are sent to prison. The girl runs away whilst the boy is taken by strangers from Montana to Canada. It will be a novel told in the first person from many years later. On the relationship between authors and readers, Ford leaves us with an acute observation: that we were readers before we were writers and writers because we were readers.
Jon Atkin
Posted by MLF Blog at 2:42 PM

I am going to the lit fest in 2015 and your post made me look forward even more.