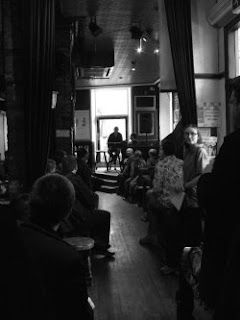 Vvoorp Vvoorp! Comic Book Adventures in Time and Space | Saturday 18th October 2008 | Lass O’ Gowrie Pub
Frankly, I feel as though I am still recovering from this event. The day was utterly jam packed, bursting at the seams, full of stuff to keep the fanboys ( and indeed fangirls ) happy. I tried to write a full chronological rendition of what happened, but it turned into a not very good epic poem. Needless to say it was a day-long-Doctor-Who-in-comic-form extravaganza, conveniently located in one of the best pubs in Manchester.
Panels started at 9.30 in order to fit everything in before the football started. We meandered from the backup scripts in Doctor Who Magazine, or DWM by those in the know, with the inimitable pie-consuming Dez Skinn and Ade Salmon, who currently has pages of his work on a Cybermen comic for DWN on the walls of the snug. 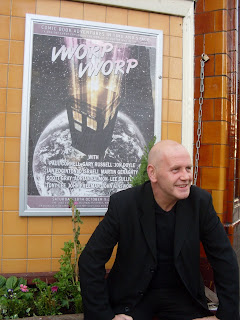 Dez Skinn outside the Lass O' Gowrie
From there we twisted through the highs, challenges and pitfalls of creating comics and animations based around the popular TV series, eventually ending with the unforgettable comedy duo that is Gary Russell and Tony Lee. They were discussing the latest forays of the Doctor in US-only comics, during which Tony Lee managed to reveal, despite Gary Russell instantaneous retraction, some exciting news about the future of the series. Gary Russell also tried to hypnotise the audience into buying the trade paperback of Agent Provocateur despite its only being officially available in the US and Canada. 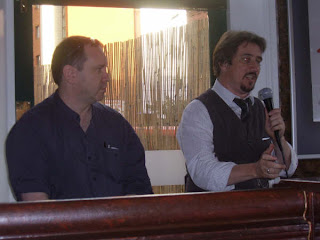 Tony Lee giving away secrets while Gary glares at him to be quiet.

However, he highlight for me was the panel with Ian Edginton and D’Israeli, discussing their work on an original comic for Torchwood Magazine. D’Israeli gave some insight into his working habits, demonstrating how he developed his images from drafts to finished product. 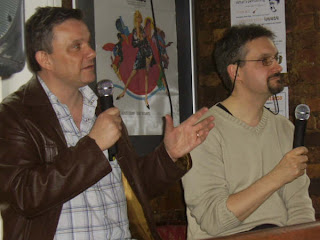 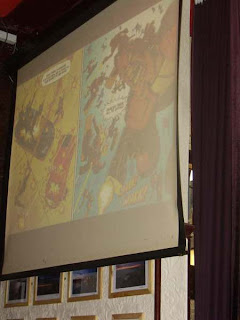 Latest Torchwood Comic by Ian Edginton and D'Israeli on the big screen
From quite early on it was clear that the day was going to run over, despite being planned with military like precision. The Doctor Who comics scene seems pretty close knit, and while the staff were chasing round trying to feed, film, photograph, water and generally tend to the guests, all the while ushering them in the right direction, the guests seemed content to watch their colleges on stage, gossip and never be around when the organisers were looking for them. In terms of gossip, these guys could put Dot and Ethel to shame! 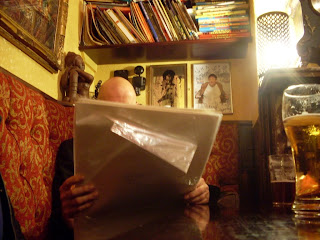 Dez Skinn in the snug
The series of panels were punctuated by a charity auction, with the proceeds going to MIND, and despite a few technical hitches, which resulted in half the pub being unable to see the powerpoint presentations, I think everyone who attended had a wonderful time. Luckily, when the football fans turned up just after 5, the fun didn't end and the Doctor Who aficionados and celebrities were ushered upstairs to continue carousing and were treated to a free and intimate stand up show by Charlie Ross.
John Freeman gives a slightly more comprehensive version of the day here , while the full line up, including all the guests, can be found here.

Ella Wredenfors is an Art History graduae, a Captain Beefheart aficionado and fizzy water connoisseur. She writes an arts, culture, and comics blog @ www.runpaintrunrun.net.
Posted by MLF Blog at 8:50 PM

I REALLY WAS joking, you know, seriously.