Manchester Literature Festival is committed to developing and delivering work that offers children and young people access to the very best in contemporary writing from across the world. A wide range of projects and events take place throughout the year as well as during the annual festival, encouraging children and young people to be inspired by stories and literature. Here, the Festival's Children and YP Co-ordinator Liz Postlethwaite explains a little more about the programme. If you'd like more information, she can be contacted via email: liz@manchesterliteraturefestival.co.uk

MLF: There are a number of events and opportunities for children and young people to become involved in Manchester Literature Festival this year – what’s available for the different age groups?

LP: We have something for readers and story-lovers of all ages. Our schools’ programme includes writers such as Ulf Stark, Alex Scarrow and Barry Hutchison, with events particularly targeted at young people coming towards the end of primary school and the beginning of secondary. We also have a Family Reading Day on 21 October, which includes workshops, readings and performances for children from three upwards, including Juliet Clare Bell, Tom Palmer, Sita Brahmchari and V Campbell. We’re delighted to have a performance of The Lion The Witch and The Wardrobe by Theatreworks Arts Lab and also Stanley’s Stick, which has been adapted for stage from John Hegley’s book by Oldham Coliseum. To top that all off, we have a lunchtime storytelling session from Cerrie Burnell and Alex Winters of CBeebies fame.

For older readers aged 13 and upwards we have a brand new film and book club called Read It, WatchIt, Talk About It, which is an exciting new partnership with Contact. We’re also looking forward to having a group of young journalists working as digital reporters on events across the festival. Finally, we have been working with young parents and their children in Wythenshawe to develop their storytelling skills. It really is a jam-packed programme of events! 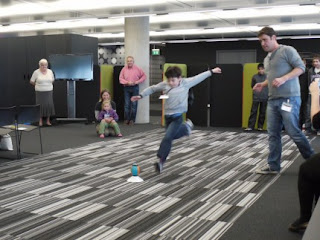 MLF: Read It, Watch It, Talk About It sounds like an interesting way to get young people into reading. How did the idea come about?
LP: We are always keen to create projects that cross between different art forms to get young people interested in stories and reading. This project uses films that have been adapted from books as a way of inspiring excitement from young people in stories that are new to them. It also lets them learn more about stories they love in their original format - a book! The first session is on Saturday 20 October and we’ll be reading / watching Tsotsi based on the novel by Athol Fugard. After that, we’re watching Hunger Games in November and Nick and Norah’s Infinite Play List in December. The group is totally free of charge and participants can even borrow copies of the related book before or after the session if they’re inspired to give reading it a go.

MLF: As well as encouraging reading, a couple of MLF projects aim to help young people with writing, don’t they? Could you tell us a little more about the Writing Squad and the digital reporter scheme, and how to get involved.
LP: WritingSquad has been running in Yorkshire for ten years and we’re delighted to be part of bringing it to Manchester this year. The scheme supports emerging young writers and helps them to develop their craft. In the North West, this means we will be working with ten young writers giving them the chance to work with each other and with professional tutors for two years. This will be followed up with ongoing support to help writers make their way in the literature industry as well as offering a sounding board and support network for a growing community of young writers and producers in the North West.


Our digital reporters project will see young people from across the city attending events at the festival to write reviews, record podcasts and take photos, giving their own opinions on the events that they have attended. Keep an eye out on our website during the Festival to get a taste for the content that they are creating.

MLF: If you could pick one event from the Schools & Families programming at this year’s Festival, what’s going to be your highlight, do you think?
LP: For me, it has to be Ulf Stark. He’s a writer who’s very well known for his children’s books and screenplays in his native Sweden but who is less well known here. In anticipation of his event at the festival on 2 October I did some background preparation by starting to read his books and I was absolutely astonished. Can You Whistle Johanna? is one of the loveliest pieces of writing that I have read in a long time. I can’t believe that I had never heard of him before but now I’m super excited! I feel like I’ve discovered a new hero and now I’m going to hear him talk about his work within a matter of weeks!

MLF: What other projects is MLF involved in?
LP: We’ve been running a brilliant project in partnership with Barnardo’s developing storytelling skills with young parents in Wythenshawe. This has included reading, crafts, cookery and nature walks included by children’s stories! It has allowed us to build a new relationship with Baguely Children’s Centre and continue developing our friendship with the library at Wythenshawe Forum, without whose kind support this project wouldn’t have been possible.
Posted by MLF Blog at 5:40 PM