NW in the North West

Zadie Smith’s first novel in seven years might be called NW, in tribute to the north-west London where she grew up, but there’s a pleasing symmetry to her appearance at Manchester Literature Festival’s Trailblazer event. NW in the North West is more than just a glib play on words. Smith’s fourth book might be set in London, amid the complicated lives of four thirtysomethings who grew up on the same estate. But its concerns are more universal. It deals with time, aging, family, friendship, memory and living in the city - any city.

Listening to Smith read an excerpt (as pictured below), it also sounds fantastic. 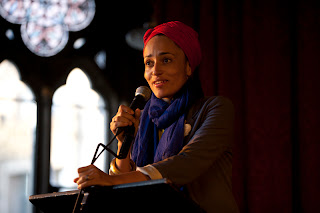 The common conception of Smith is that she’s a relatively private, reserved person. Public appearances such as these are rare, and she holds little truck with celebrity; in fact, 2002’s The Autograph Man has a nice line on its effect on authenticity. And yet the reading from NW has almost a gleeful, performative aspect to it. Smith genuinely inhabits her characters - it helps that she has such an ear for the rhythms of dialogue - and makes them feel dramatically real. Just don’t expect her to agree. “It’s all a confidence trick,” she says when writer and journalist Anita Sethi (below right) asks afterwards how she captures conversation. “People loved the authenticity of the dialogue in The Wire, didn’t they? But that’s not really how people from Baltimore speak. That’s the trick of fiction; it never actually is authentic, but it seems to be.”

Still, reality is something that clearly concerned Smith in the writing of NW. Having spent time teaching in the States, it’s obvious she’s thought deeply about the mechanics of the novel and its uses - and in particular what it doesn’t do and perhaps could or should.

“Novels manipulate time in a way that isn’t anything like how we live our lives,” she says, by way of example. “So when I sat down to write NW, I began listening to my friends, and how they felt like time was really speeding up as they approached their 40s. I tried to replicate that idea in NW, rather than give it this stately weight of time passing at the same pace. Maybe that makes the book uneven and strange, but then, so is life.”

And just as strange, for Smith, is writing itself. Growing up in the public eye - White Teeth was published when she was in her mid 20s - she reveals that, when she does go back to her debut novel, she can barely believe she wrote it. All the plaudits and prizes seem, for her, to have been awarded to someone else. Even the process of writing is a strange, out-of-body experience. 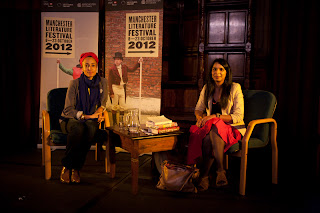 “If I have one talent, it’s that I’m able to write something, and then read it, and edit it, dispassionately. As if somebody else has written it other than me,” she says.

Of course, Smith has more talents than that, as just a brief introduction to the world of NW proves. She’s wryly comic, perceptive and disarmingly wise for a thirtysomething. But perhaps it's exactly this disassociation from the norms of novel-writing which makes Zadie Smith such an intriguing novelist.

Ben East is an arts and culture journalist based in Manchester. You can follow him on Twitter @beneast74
Posted by MLF Blog at 11:00 AM