In a fortnight, MLF, Carcanet and friends will be taking over Waterstones’ flagship Deansgate store in the city centre, with various exciting events starting at noon. The café will be serving up a tasty poetry-themed menu especially for the day, and verse will be read live in the Event Room throughout the afternoon and piped over the shop’s announcement system. A number of well-known poets are confirmed so far, with more expected to join the line-up in due course. Here's the running order:

From 7pm, National Poet of Wales Gillian Clarke will be reading extracts from her new collection Ice and also chatting to Carcanet’s Editorial and Managing Director Michael Schmidt. 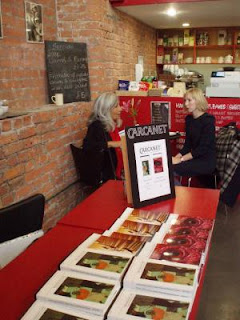 Following on from this, Manchester Literature Festival will be holding a number of poetry events over the 16-day programme. Poet Laureate and Festival patron Carol Ann Duffy is among the performers on this year’s bill (9 October), which also includes Simon Armitage (16 October) – awarded a CBE for services to poetry – and world-renowned spoken word advocate Amiri Baraka (10 October). Up-and-coming voices will be heard in a special Faber showcase (12 October), with Joe Dunthorne, Inua Ellams and editor Matthew Hollis, while Arc Publications will present work in translation (19 October). The winner of the biannual international Manchester Poetry Prize will be announced at a special gala event (19 October) and the Cathedral Poetry Prize will also be handed out (11 October).

The Poets & Players group will see award-winning Leontia Flynn perform alongside a traditional Irish band (13 October), while the Sailing To Byzantium event sets WB Yeats’ poems to music (21 October). The Out Of Bounds collection brings together black and Asian writers, including John Siddique (20 October), while readers including NPD Director Jo Bell will perform works by the likes of Ian McMillan and George Szirtes at the launch of the Split Screen anthology (14 October). Other events include a guided walk, Poems Of The City (11 October), and a discussion, featuring Carcanet's Michael Schmidt, about the value of editing in the 21st Century (17 October).
Posted by MLF Blog at 4:38 PM