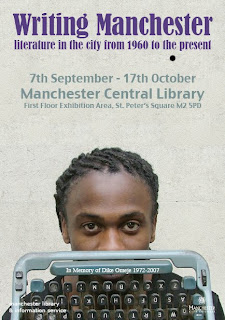 If you are in the city centre over the next month we urge you to check out this unique exhibition, covering fifty years of writing in Greater Manchester, which has a growing reputation as the independent publishing capital of the North. Based on archival research by a major university project called ‘Moving Manchester’, the Writing Manchester exhibition profiles the city’s most influential writers, publishers and writing organisations (most of whom have featured in the Manchester Literature/Poetry Festival over the years) as well as providing an overview of the city’s literary trends and specialisms.

As part of the Moving Manchester project, John Siddique (who is appearing at this year’s MLF Northern Salt event) has been commissioned to write a series of poems on the theme of immigrant lives – you can check these out at the online gallery and see John performing his commissioned poems alongside Jackie Kay as part of a Creative Arts Day at the Whitworth Art Gallery on Saturday 12th September.