Margaret Atwood's Year of the Flood 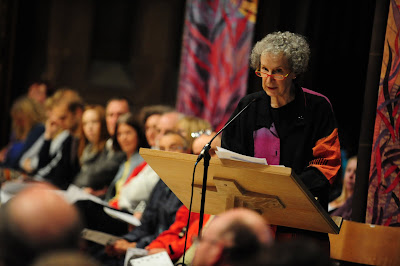 The long queue of people stretching out the doors of Manchester Cathedral last night was an encouraging spectacle. Margaret Atwood’s Year of the Flood evening was a sell-out, and whether people were there because they loved her writing, or because they thought it sounded like a good show, there was no cause for disappointment on either count.

The Trailblazer event for next month’s Manchester Literature Festival was the first performance in the author’s international book tour, with each event doubling as a fundraiser for a local environmental charity (in this case, the RSPB.)

The Year of The Flood brings us back to the world Atwood introduced in Oryx and Crake, widely acknowledged as a masterwork of speculative fiction. It’s a world where most of the human race has been killed off by a pandemic; where the few people left scrabble for survival in a dystopian wasteland overrun with freakish genetically engineered animals and patrolled by the company soldiers of CorpSeCorps. Most of all, it’s a world where a homespun religious cult called God’s Gardeners farm rooftops and sing hymns about holy pollination, vegetarianism and the preservation of species.

These hymns were set to music by California composer Orville Stoeber and they marked the beginning of the performance. You heard the singers before you saw them, filing slowly into the centre of the Cathedral bearing cardboard banners inked with images of endangered species such as the Natterjack Toad and Kingfisher. The singers, drawn from the Manchester Lesbian & Gay Chorus, Ordsall Acapella Singers and the Blackburn Community Choir, delivered Atwood’s hymns with their gentle melodies and simple harmonies in a straightforward and humble manner befitting God’s Gardeners.

In order to reduce the size and carbon footprint of her traveling posse, Atwood is enlisting local performers in every city, making the presentation slightly different each time as well as engendering a kind of community ownership of the event. The change was refreshing; It couldn’t have felt less like the standard book tour dog-and-pony show.

The real stars of the performance were the wonderfully talented and versatile actors who read the parts of main characters Adam One (Kevin Harvey), Toby (Samantha Giles) and Ren (Samantha Sidall.) They had a challenging task: the dramatic reading of whole passages fully embodying their character while also filling in as several secondary characters. But they held the whole cathedral transfixed; the narrative spell was never broken. The readings were linked by Atwood’s elegant summaries of the background action, so the audience were able to understand the wider sweep of action in the book.

Still, at evening’s end, when all were invited to stand and join in singing a farewell hymn, several questions remained tantalisingly unanswered. There can’t be many people there last night who won’t be seeking out The Year of The Flood sooner or later. I know I will.