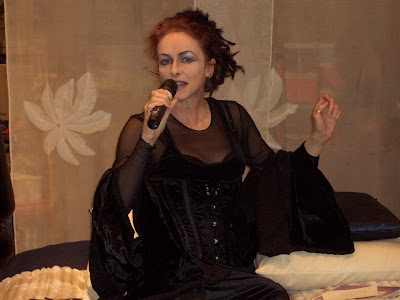 It must be have been daunting to be the first acts in the Manchester Literature Festival, but these two poets managed it with aplomb. The unusual setting of a black lacquer four-poster bed in the middle of Heal’s shop floor seemed at first incongruous.

Helpers handed out glasses of wine to the audience, who passed the time filling in their questionnaires. At last Kei stepped up to the microphone, somewhat shyly avoiding the bed. His gentle introduction about himself and his poems instantly drew us in and the room shrank to contain only the poet and his audience. His sunny appearance and mellifluous words poured over us like warm molasses. From a delightfully poignant poem of resilience in the face of unsuccessful pregnancies, to soldiers fighting in tanks being heartened by the unexpected aromas of home cooking his understanding and interest in humanity shone through.

After a short break, Rosie Lugosi confidently climbed onto the bed and took centre stage, deftly arranging her shiny black stilettoed feet to maintain decorum. With a deliciously mischievous smile, she plunged us into the dark world where the ‘lights go out’ and intimacy and trepidation go hand in hand. Whilst still reeling from this disturbing evocation, she then took us firmly by the ears and led us through the intriguing eternal life of a fiercely proud Egyptian princess whose determination ensured her longevity.
These two poets appeared to be an unlikely combination, but the surreal chill of Hagen Daas ice cream and the roaring spirit of a feisty mummy defying oblivion kept us enthralled and sent us headily spinning and sated into the Manchester afternoon sun.
- Claire Yates
Posted by MLF Blog at 2:26 PM