Blowing Our Own Horn 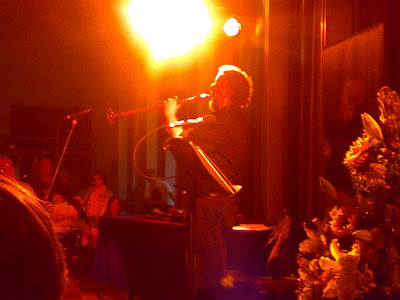 The first weekend of the festival was a roaring success, with big crowds attending readings, workshops and events. Offerings ranged from readings (Bloodaxe Poets and Les Murray), a talk on Wild Mary Wesley, and a graphic novel workshop.

Saturday saw the alt-publishing tribes gather for Independents Day, a one-day conference at the Lowry that featured readings, seminars, workshops and debates... and bookstalls featuring more zines, magazines and small-press books than you could shake a stick at. And it proved, once again, that independent publishing folks have a lot to say to one another. Over conversation, many ideas were hatched, and we're sure some interesting creative alliances were made.

On Sunday, adults and children alike enjoyed Carol Ann Duffy's marvelous poetry and stories for kids, and the amazing sounds her "best friend" John Sampson made from his eye-popping collection of whistles, horns and woodwinds, including what may be the smallest bassoon in the world. The turnout at the Whitworth was better than in London, Duffy told the crowd, where she recently showed up to read from The Hat and her other kids' books and found she was facing an audience of 100 grown-ups!
Posted by MLF Blog at 11:13 AM