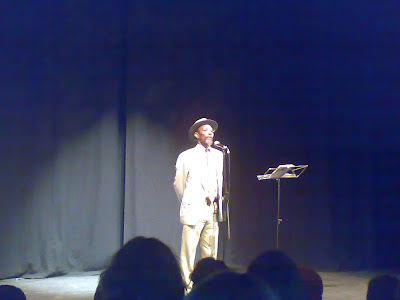 Saturday evening, Linton Kwesi Johnson led the audience through a vivid modern history of black Britain, powerfully illustrated with his own poems. A standing-room-only crowd packed the Contact Theatre for this rare opportunity to hear the poet read in Manchester, and they were not disappointed. It was really a night to remember.

The final weekend of the festival was so stuffed with events it made deciding what to go to a difficult task. From Howard Jacobson and Galway Kinnell on Friday night, to Saturday's powerful lineup, which included Maggie O'Farrell and Anne Enright, Roddy Doyle, Tariq Latif and Gerard Woodward and Adam Thorpe, to Sunday's Doctor Who and Comedy Curtain call events, it was a hectic weekend in the best possible way.

Many thanks to everyone who worked so hard to make this year's festival a success, and especially to the audiences who return each year to prove that live literature is a vital and thriving part of British culture - and an indispensable part of life in Manchester.
Posted by MLF Blog at 12:29 PM