Manchester Literature Festival collaborates with various cultural associations and artists on special projects throughout the year, and we're very excited to see the fruition of one of these for 2013 with the launch tomorrow of short story collection Beacons: Stories For Our Not So Distant Future. Here, we chat to Beacons (Oneworld Publications) editor Gregory Norminton about the book and the special event at our official partner venue, the International Anthony Burgess Foundation, tomorrow at 6.30pm (free entry; click here for full details; follow @beacons_stories for more via Twitter).


MLF: Could you give us a brief outline of the book?
GN: Back in 2007, when the idea for Beacons first came to me, very few literary writers were engaging with the ecological crisis. This was left to genre fiction, notably science fiction. Now I love good SF, but we are talking about an existential challenge to the basic assumptions of our civilisation: if mainstream writers can't get to grips with it, what use are we? I'm not talking about activism in prose – that is always deadly for good writing. But a literature that blinds itself to the truth is pure decadence. Anyway, seeing a dearth of fiction engaged with climate change, and having sought ways of addressing it in my own writing, I decided to throw down the gauntlet to my peers and betters. When a society faces upheaval, it looks for fresh narratives to help makes sense of events. Statistics cannot motivate us as stories can, yet where are the George Orwells, the Aldous Huxleys and William Morrises of the ecological crisis? Along with Mike Robinson, then chair of Stop Climate Chaos Scotland, I set about recruiting enough writers to put together a collection of original stories responding to the challenge. It has taken years to get to the point where I can now caress and coo over a finished book, but the effort has paid off. Beacons consists of 21 short stories that attempt, in a splendid diversity of ways, to help us imagine what we so often fear to look at. As a bonus to contributors and readers, author royalties go to the Stop Climate Coalition.

MLF: How did you get so many critically acclaimed and well-respected authors involved?
GN: By a combination of tenacity and low-level harassment. In the first year of the project, I wrote to over one hundred British authors. (We decided to limit ourselves to this country, though there are wonderful writers abroad who are ahead of us in the field.) One famous author sent me vitriol for being a 'warmist'; many expressed sympathy for the project but declined to contribute; enough were willing to lend their names if it would improve our chances of finding a publisher. Short stories are a hard sell. We needed some big names to drive the thing forward; and we got lucky, because as it transpired, many writers were wrestling with our all-encompassing theme: wrestling as writers, but also as citizens, since none of us can retreat to an oasis, or into internal exile, from the degradation of the biosphere. In my experience, fiction writers are a surprisingly generous lot, capable of interspecies solidarity, and often ready to give of their creativity where money is lacking. We have a fine collection of writers in Beacons – from rising talents like Tom Bullough, Nick Hayes, Holly Howitt and James Miller to established names like Joanne Harris, Alasdair Gray, Janice Galloway, Toby Litt, Lawrence Norfolk and Adam Thorpe. All are equals on the page – and in their generosity. 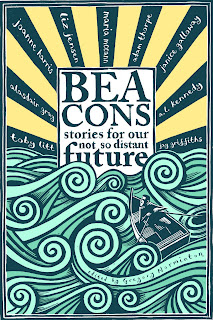 MLF: The anthology is divided into three parts - what are these, and what do they signify?
GN: You need some kind of structure to a collection of stories. What this would be, of course, depended on the flavour and content of the stories as they were delivered. I had the idea of dividing the book into three sections (few things more pleasing than a triad) which, taken together, would imply a thematic journey. Each section of the book takes its title from an epigraph: the words of an astronaut, a Native American chief and a poet respectively. But I think I will leave questions of interpretation and significance to the reader.

MLF: Tell us about the illustrations.
GN: I wanted the book to have a particular visual flavour. Once the impossibly talented Nick Hayes was on board to contribute a 'graphic story', it seemed a great idea to commission Nick to design the cover and the artwork. And so it has proved. Beacons looks like nothing else on the book tables in our dwindling bookshops. I hope this will encourage punters to pick it up and buy it.

MLF: The event is a collaboration between the Manchester Writing School at MMU, Manchester Literature Festival and Steady State Manchester - how did that come about?
GN: I have the good fortune of being employed as a lecturer at the Manchester Writing School. As a result, James Draper, our enterprising manager, offered to sponsor the launch at the International Anthony Burgess Foundation. This means we can let people in for free! As for Steady State Manchester, it was they who proposed a joint launch with Beacons, and who, over several meetings with myself and Cathy Bolton of the Manchester Literature Festival, came up with the idea of an interactive event. If that sounds intriguing, you will have to come on Thursday to learn more.

MLF: What is the involvement of the Stop Climate Chaos Coalition?
GN: Stop Climate Chaos is an umbrella organisation made of pressure groups, churches and charities dedicated to action on climate change and limiting its impact on the world’s poorest communities. It was instrumental in getting Climate Change Acts passed at Westminster and Holyrood. Mike Robinson, who wrote our afterword, was the chair of the Scotland branch when I began work on the project, and, for reasons too complex to go into here, his support has been essential for its realisation. Some of the bigger NGOs in the coalition are promoting and selling the book to their supporters. Thanks to SCC, we hope to reach a wider readership than short stories commonly enjoy. In return, it is only fair to send our author royalties back to help their future campaigns.

MLF: Is climate change and sustainability still / was it ever an agenda-changing issue in light of other global problems, such as recession, terrorism, poverty, etc?
GN: It is, alas, the envelope that contains all of the above. Resource depletion and extreme weather mean hunger, economic decline, poverty and conflict. In one sense, our climate crisis is a symptom of an unsustainable mode of collective being. This makes addressing it hugely inconvenient to vested interests. Hence the well-financed efforts by those interests to discredit those who are issuing the alarm. It is true that media attention on climate change has dwindled, and I see a growing ideological resistance both to the science and to the policies we need to respond to it. There are a lot of very seductive lies in our culture for the moment: that the problem doesn't exist, that it isn't as serious as 'alarmists' pretend, that ecologists are all Commies trying to take away our freedoms. Countering these lies is difficult, given that the truth is highly unpalatable.

MLF: How can literature change the world?
GN: I don't know that it can – for the better. For every George Orwell warning us about threats to society, there is an Ayn Rand leaking poison into its bloodstream. Individuals can be awakened by great literature – it is one of the tools for consciousness at our disposal – but I have few illusions that a collection of short stories can alter much. This is not a reason for quiescence. We may be going down, but let's not do so meekly, if you please.

MLF: Is the launch deliberately timed to coincide with Climate Week?
GN: Yes. We need all the help we can get, and so does Climate Week: a valiant attempt to return the crisis to the foreground of our distracted culture.

MLF: Could you tell us a bit more about the launch event at the International Anthony Burgess Foundation tomorrow.
GN: I will be hosting and reading from the book, alongside two of its contributing writers, Clare Dudman and Rodge Glass. The event is free, with books on sale at a discount. Steady State Manchester will lead a shared conversation about books that have inspired change or action in their readers. It will be an interactive evening, a celebration of the power of story to waken our inner selves. It should be fascinating. I just hope my wretched cold will have eased off before Thursday!

MLF: Thanks, Gregory. We'll be posting a review of the event on the MLF blog later this week...

Gregory Norminton is the author of four novels - The Ship of Fools, Arts and Wonders, Ghost Portrait and Serious Things - as well as a book of aphorism, The Lost Art of Losing, and two collections of short stories to be published later this year. He teaches creative writing at Manchester Metropolitan University and lives with his wife Emma in a Quaker community in the Peak District.
Posted by MLF Blog at 5:06 PM