Postcards from the Past - from Posiedon to Zeus 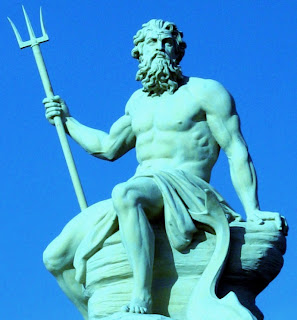 Brother, war is brewing. The Titans are ready to attack. Waters are unstable. I can feel the presence of another being roaming around the Atlantic destroying many fish colonies. Athena has come up with many ideas to withstand the Golden Age from reappearing. Even Hades had the decency to contact me as many souls have refused to go to Elysium. My cyclops are working hard to create new weapons to defend Olympus. You must get the wind Gods to support you and protect the areas of Olympus.

The Hyborean giants are already defending Northern mountains; the areas where Kronos (Saturn) is rising. I have acknowledged from Apollo that Kronos is reappearing bit by bit as our children lose faith in us. Ares has gone into the effort of teaming up with Athena to create safer battlefields and to protect our city. I however, will try my best to protect all waters. Many river gods are reporting news upon any Titans I have long forgotten. On the other hand, you haven't done anything after my last emergency call with the rainbow goddess.

Many gods are disappearing, the gods who are not very important perhaps in the human world. You must plan something as you are the main god of all. I hope you understand the danger we are in.

Written by Fatima Anwar from Pulling Together as part of Postcards from the Past. "My inspiration is the book of Percy Jackson written by Rick Riordan. It is based on Greek Mythology, with gods with their Roman forms as well as their Greek forms."

Labels: MLF 2013, Postcards from the Past, Pulling Together