I hadn’t known exactly what to expect from Mark Haddon at his event at the Manchester Literature Festival; whether he was going to do a talk, read from his books, answer questions, or a combination of these things. What he did do surprised me – he presented a piece entitled “Swimming and Flying”, an incredibly dynamic and engaging speech which addressed a huge range of subjects and which included some advice on writing. As an aspiring writer, I found his words of wisdom very interesting.

He began by telling of an incident that took place when he was at boarding school, when he naively owned up for something that turned out not to be his fault, was punished, and became a hero among his schoolfellows. He described his confusion that everything as he knew it had been turned upside down; he was effectively being congratulated for breaking the rules. He then went on to talk about his love of science and how, from a young age, he has grappled with big questions, for example: will we ever know exactly how big the universe is, and where it ends – if it ends? This is something I have often pondered myself, and whether we will ever know the answer, I do not know. 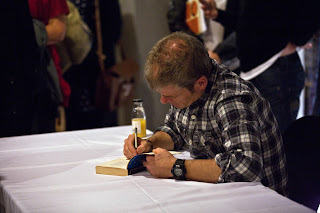 Mark went on to discuss both swimming and flying; how he had once been afraid of swimming in deep water and of great white sharks. He was running by the Thames one morning and decided on a whim to swim in it, and the way he described the experience was like poetry. He clearly adored it. He now swims in the Thames several times a week, which I am in awe of. He then spoke about overcoming his fear of flying by realising what a miracle it is that we human beings have learnt how to fly. His tale ended with a description of him in a plane flying up into the unknown, and as well as being a nice image on which to end, it also summed up all his ideas on science, the universe, facing our fears and how trying to understand something can stop us from being afraid of it.

I enjoyed his talk; it wasn’t what I had been expecting, but it was very special and personal, and really made me think – about science, writing, taking risks and overcoming fears. Afterwards he signed my copy of The Curious Incident of the Dog in the Night-Time, and he was very friendly and pleasant. I went home feeling that maybe I would look at the world slightly differently now thanks to this talk. I had an evening to remember. Thank you, Mark Haddon, and thank you, Manchester Literature Festival.

Liz Gibson blogs at: http://lglyrics.blogspot.co.uk
Throughout the Festival in 2012 we have been working with a group of young people to support them to become digital reporters, and to document a range of events from their perspective. As well as writing blogs and reviews, the young digital reporters have responded to our events using other methods such as photography, illustration and radio.
Posted by MLF Blog at 12:50 PM