I was the beneficiary of a random act of kindness in getting a ticket for Jeanette Winterson and AM Homes in conversation when I was given it by a total stranger I'd got chatting to a couple of days before at another MLF event. This was evidence to me of that shared (and yes, cosy) community that is the world of book-lovers - readers and writers alike (thanks to Artificial Silk, you know who you are).

It was this kind of generosity of spirit that for me was most noteworthy about listening to JW and AM  in conversation. There was such warmth and mutual regard between these two writers who had known each other's work long before they became friends. The fact that they were both adopted as children is a strong common bond that they share, in addition to being writers. I was left wondering if a conversation between two male authors would have had such warmth. Don’t think so. I'll admit, I'm not an avid fan of either writer, having read JW’s work in the 80s when it was obligatory for any aspiring feminist undergraduate, and having never read AM Homes. However, I was certainly motivated to go away and do so.

It’s interesting that the solitary pursuits of both reading and writing are so fundamentally communal when lovers of the same literature, both producers and consumers, come together. Reading and writing seem so sociable at events such as these. But it does also seem counter-intuitive and destined to disappoint when we ask our writers to “perform”. 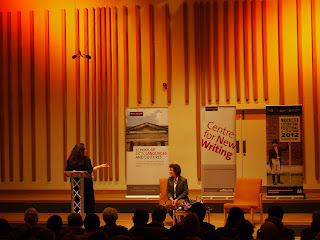 There was a charming self-consciousness between these two writers as they tittered away about the ruder parts of AM Homes' latest book, May We Be Forgiven. It was a bit like a couple of undergraduates getting the giggles when presenting in front of a lecturer; in this case Nancy Rothwell, the University’s VC who was looking on. JW seemed fairly giddy about the occasion and began the evening with hilarious reference to fact that she had by chance chosen the same outfit of frock coat and boots that was worn by the rather stately gentleman on the pull-up banner which advertises the MLF.  At other points in the evening, it was as if they were so absorbed by their conversation that they forgot the audience was there.

JW and AM discussed women’s writing, both expressing concern that women were pigeon-holed in writing small world stories rather than the great novels which cover the big issues (Jonathan Franzen got more than one mention in this respect). They speculated on why so few men seem to read women’s writing (albeit quoting from a GQ survey that probably lacks rigour). They seemed to agree that AM has a slightly different readership from JW. JW said it was women writers who were drawn to her creative writing classes, whereas AM said it was the geeky men who were drawn to the classes she teaches. She shares the JK Rowling approach of avoiding her true first name as her writer’s name; in the great tradition of George Eliot hiding gender in order to get a wider readership (though she would argue more accidentally, than deliberately).

An interesting evening in which JW felt clearly at home in our city and the Manchester audience lapped up her reading from Why Be Happy When You Could Be Normal?, in which she brilliantly describes Manchester and our restive and creative tradition. The audience clearly wanted more from JW than they got, but, in true Manchester fashion, they welcomed and warmed to the interloper of the night AM Homes.
Fiona Christie is a self-confessed lover of books. You can follow her on Twitter @FCChristie.
Posted by MLF Blog at 5:26 PM