Yesterday evening marked the official launch of Manchester Literature Festival 2011 with a VIP event attended by the sponsors, funders, partners, venues and members of the press who are supporting this year's fortnight of readings, workshops, launches and special commissions, running 10-23 October.

Quite a crowd gathered in the year-old 2nd View restaurant on the top floor of Waterstone's flagship Deansgate store. The constant flow of guests made their way from the bar area with its shiny black marble surfaces into the large, high-ceilinged "inner sanctum", all plush purple sofas and statement wallpaper. Welcomed on arrival with flutes of pink fizz, everyone was soon chatting in groups and sampling the tasty canapes making their way round the room. 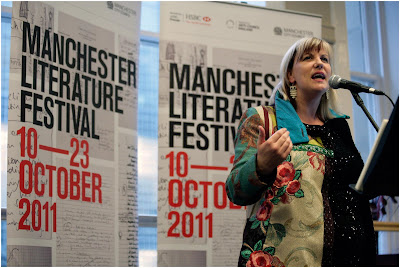 The reception was followed by speeches. First up, Festival Director Cathy Bolton outlined the impressively varied programme lined up for MLF's sixth year, explaining the international strands but also emphasising the importance of showcasing local writing talent. She also explained how the Festival has been going from strength to strength and this year is the biggest ever. On a night when both the city's football teams were playing European matches, Cathy's quote from a preview in The Economist's Intelligent Life was particularly apt: "Although a comparative newcomer to the scene, the Manchester Literature Festival is already in contention for Champions League status."

Cathy introduced to the microphone Cllr Mike Amesbury, Executive Member for Culture and Leisure at Manchester City Council, who, along with Arts Council England, provide valuable financial assistance to the festival. Mike described how important a role the Literature Festival plays in the city's world-class calendar of events, drawing in not just writers, but also audiences from across the UK and beyond. He spoke of the benefits of such events, both in terms of garnering financial investment in Manchester but also in raising the region's profile on the global stage.

Richard Knight, Head of HSBC Premier UK, also focused on the international aspect of the annual fixture as being one of the main reasons for the bank choosing to become the Festival's principal sponsor this year. He said how HSBC Premier are excited about the way in which culture brings people together, describing Manchester Literature Festival as a "premiere literary festival" which does just this.

After a brief break for more mingling and the recharging of glasses, performance poet Kate Fox (pictured) took to the floor. An Edinburgh Festival veteran and regular on Radio 4's Saturday Live show, Kate had been commissioned to create a poem about Manchester Literature Festival 2011, and this was her first airing of the new work, which was completed on the night with some last-minute lines taken from converations with guests. Drawing inspiration from the recurring theme of journeys and also from the diverse audiences the Festival attracts, Kate's (as yet untitled) piece was clever, funny and a really interesting addition to the evening. A film of the poem will be available on the Festival website in a few days time, so look out for that.