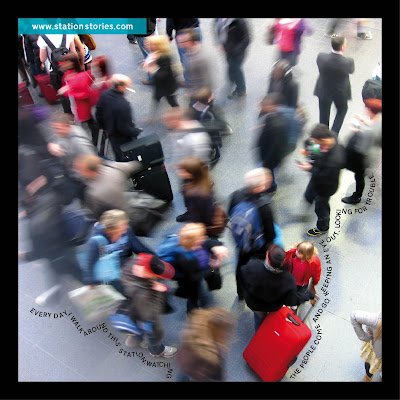 The brainchild of novelist and flash fiction author David Gaffney – whose Edgehill Prize-longlisted collection The Half-life Of Songs recently came out on Salt – this promenade literary event sees six local writers surreptitiously and not so surreptitiously reading specially commissioned tales of trains and tracks and other things beginning with “tr”. Actually, as the project’s manager Diana Hamilton explains, the stories are about “murder, love, conspiracy: a real mix”. They’re inspired by the particular idiosyncrasies of Manchester’s busiest concourse and, says David, whose contribution is called Hidden Obvious Typical, “are all unique to the station setting”.

He continues: “Stations are weird places, where you have maybe illicit meetings... where anything can happen and often does. You’re in between different worlds, and that’s kind of what inspired us to go there.

“Station Stories will take people on a literary journey. It will explore the day-to-day life of the station – its platforms, its workers, the journeys people take, the waiting, the encounters, the thrill, the loneliness, the joy, and it will express the peculiar, unique qualities of the station – a marginal, in-between world.”

To reflect the changing mood of the station over the three different performance times – midday, afternoon and evening – project participant Peter Wild (co-author of Before The Rain and editor of various collections, including Paint A Vulgar Picture, plus the Bookmunch review site) has written three versions of his story The People Spotter.

Audience members will be led around various locations within Piccadilly Station, stopping at points near each of the six storytellers and listening to them one by one broadcast live via headphones. It may be obvious where the writers are: one, the Station Stories website reveals, is at the end of Platform 5 with a notebook and a Thermos flask; another, Jenn Ashworth, is in a photo booth. Jenn says members of the public, unaware the project is going on, may even interact with the writers (one of whom, David tells me, is going to be dropping litter, perhaps provoking a reaction), adding an extra element to the live aspect. “The unpredictability of it is something I found really attractive,” she says. “Each performance is going to be quite different.”

Jenn Ashworth – author of A Kind Of Intimacy, which saw her shortlisted in the Culture Show Special New Novelists: 12 Of The Best, and Cold Light, which has just been published – has penned a story called Soulless for the project. As Diana explains, this explores “the idea that every time your photograph is taken, part of your soul is taken. And there’s a reason why she doesn’t need her soul any more...”

The performances will involve props and effects, and the stories are backlaid with a unique improvised soundtrack played live by Daniel Hopkins, aka Landcrash. This provides another layer to the experience and ebbs and flows with the spaces and pauses in each of the pieces. David says: “The stories and the music by Landcrash weave together wonderfully, and listening to a live performer in a public place in this way is like being linked directly into someone’s head. It will be uniquely intimate and public.”

Adding further variety and depth to each of the three daily hour-long Station Stories slots are the contributors’ disparate styles, ranging from flash fiction to thrillers. There’s also horror writer Tom Fletcher (whose debut The Leaping came out to critical acclaim in 2010 and whose second novel The Thing On The Shore was published last month by Quercus), with Marble, and experimental poet Tom Jenks of The Other Room project, with Terminus.

Nicholas Royle – Manchester-based Nightjar Press founder, Salt Publishing commissioning editor, creative writing lecturer and author of a number of stories and novels including Antwerp and The Director’s Cut – will be telling the tale of The Lancashire Fusilier. Nick says: “I love short stories and I love site-specific theatre/performance, especially if there’s an immersive/promenade angle, so I was thrilled when David Gaffney asked me to take part in Station Stories. It was a dream commission for me.”

Station Stories is a collaboration between Manchester Literature Festival, The Hamilton Project and Bury Text Festival. Performances are at noon, 3pm and 7pm on Thursday 19, Friday 20 and Saturday 21 May. Tickets cost £11 each. A photography exhibition inspired by the stories runs at Manchester Piccadilly Metrolink until 16 July. For more information and ticket bookings, visit the event’s official website: www.stationstories.com

Sarah-Clare Conlon is a freelance writer, editor and press officer. Her award-winning blog, Words & Fixtures, is about language, literature, arts and culture.
Posted by MLF Blog at 3:09 PM