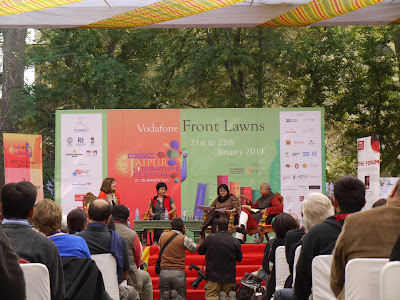 It’s the end of day 2 at the wonderful Jaipur Literature Festival and I’m feeling decidedly over stimulated! The festival takes place in the serene grounds of the Diggy Palace heritage hotel (sadly our budget pad is a rather less salubrious affair but the hotel staff are very friendly and it has Wi-Fi). Sat in the canopy-shaded front lawn listening to highly engaging and world renowned authors such as Orhan Pamuk, J.M Coetzee, Richard Ford, Chimamanda Adichie and Jung Chang, it’s easy to forget that you’re only a couple of hundred yards from one of Jaipur’s busiest roads with its chaos of hooting taxis, rickshaws, scooters and cyclists – luckily the only noise pollution here is the screech of parakeets flitting from tree to tree.

Each hour there are 4 simultaneous events happening in different spaces and they’re all free. The only drawback of the festival is having to select which events from the tempting menu to attend. Today I started with a session called Why Books Matter: Patrick French, Sunil Sethi, Kiran Desai and John Makinson in conversation with Sonia Singh. The discussion starts with some observations about India’s expanding literature market and the innate Indian spirit of intellectual inquiry – whereas the book market is stagnating in the west it is apparently growing by 18% a year here.

It’s thanks to globalisation and capitalist-driven prosperity that India’s population is becoming increasingly literate and the demand for English language books is growing exponentially (or so the likes of Penguin hope). Judging by the thousands of people thronging into the festival there certainly is a very healthy local appetite for literature and ideas. However, a Hindi journalist in the audience takes issue with the suggestion that India’s middle classes, many of whom have gained their new found status through occupation rather than education, are engaging with serious literature. Whereas they are happy to spend money on expensive designer clothes they only buy books that fit in with their interior décor or look impressive on the coffee table – sound familiar?

The discussion touches on the ethical implications of a greed-driven prosperity, but is taken up more fully in a later session being recorded for the BBC’s The Forum (to be broadcast on the World Service on Sunday 30th January). Authors Gurcharan Das, Kavery Nambisan and Manjushree Thapa, chaired by Bridget Kendall, along with the audience are invited to discuss the role of Dharma and the challenges of living a good life in contemporary Indian society. Many members of the audience seem to be of the opinion that capitalism has been good for India and that greed and envy aren’t necessarily evil. One industrialist explains that ambitious business people sometimes have to walk a grey moral path in order to succeed, but ultimately it’s for the benefit of the wider society as they help create gainful employment.

The panellists clearly have qualms about the 25% of the population that are being left behind in India’s new prosperity (an age-old poverty is very much in evidence in the streets just beyond the walls of this cultural oasis) and talk about the interconnectedness of slums and gated communities. As the session draws to an end, one woman in the audience voices the opinion that “we should stop imposing aspirations on the poor – just because they don’t want to take up the opportunity to improve their lot doesn’t mean the rich should continually agonise over their plight” – I do a double-take to make sure that’s not Maggie Thatcher in a sari!

In another fascinating session titled A Time Apart, Reeta Chowdhry talks about her novel Makam, based on extensive research into the effects of the Indo-Chinese war on the lives of Indians of Chinese descent. She explains how Chinese people, originally brought over by the British to work in the Assam tea plantations, settled and intermarried with the local Indian population, adopting their customs and very much assimilating into Assam life. But when the 1962 war started, Chinese Indians were suddenly treated as the enemy, put into internment camps and deported to China as spies – never to see their remaining families again. Her novel has been translated into several languages and is selling like hotcakes – there’s a cheer from the audience when her fellow panellist cries “and she’s getting royalties!”

The effect of the internet on writing and publishing is a recurring theme throughout the festival. Penguin’s John Makinson is optimistic that e-books and the like are opening up new readerships for literature. As he sees it, there is a growing diversification of audiences: those who are merely interested in experiencing rather than owning literature, and those who like to collect it. These two audiences are likely to coexist for the foreseeable future, so those of us who treasure the physicality of books can stop worrying. Kiran Desai has no concerns about gadget-happy literature consumers though admits she’s never used an e-reader. In fact we later learn she’s so far managed to avoid using any form of social networking and only checks her emails in expensive internet cafes to avoid having the distraction at home – this probably explains how she manages to write Booker-prize winning novels.

On that note, it’s time to power up the net book, download some photos and start blogging!