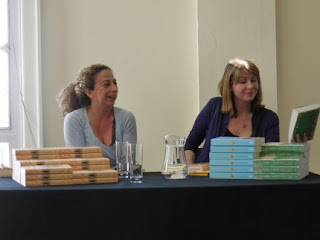 25th October
Waterstone's again hosted two fine writers, this time two novelists who were shortlisted for this year’s Orange Prize – Rosie Alison and Monique Roffey. For fifteen years the Orange Prize has been connecting readers with great writers. Today showed it is still coming up with the goods.
Monique Roffey read from her second novel, The White Woman on the Green Bicycle. Set in Trinidad, as the country becomes independent. It is part historical fiction, part a portrayal of a marriage. In the extract Monique read the novel’s protagonist watched Eric Williams deliver a speech. In her introduction she discussed blending real people, such as Williams, into fiction. It is a difficult technique because the author becomes both a witness to history, via research, and a writer of history, through the novel. It is a position of great responsibility. Roffey copes with the task admirably.
Rosie Alison’s reading was from her debut novel, The Very Thought of You. The novel has picked up a handful of award nominations on top of making the Orange shortlist, including being longlisted for the RNA Romantic Novel of the Year and the Le Prince Maurice Prize for Literary Love Stories. She spoke of how she was tired of modern novels being “unwilling to tackle grand emotion” and how they hid behind irony. She went on to say how that this almost certainly means that she is “preaching to the unrequited converted” and that readers who were not romantically inclined may hate her book. Those who are not afraid of emotional content however, may just find a new favourite.
In the question and answer session we learnt how the two authors felt about the Orange Prize, both of them feeling extremely lucky to get and grateful for the opportunity it gives shortlisted writers to reach new readers and Roffey raising the point that since the prize has existed there has been a rise in the number of women on other prize shortlists such as the Mann Booker and the Whitbread.
We also learnt that if you are a novelist the phrase “if at first you don’t succeed” still has enormous relevance. Both writers discussed how they had to fight against a wall of rejection to get their novels into print. Alison only found a publisher after three agents and two rounds of almost uniform rejection. Roffey, despite the critical success of her first novel, had to search for a long time to find someone to publish her second.
We are lucky that they did eventually reach the public, and via the Orange Prize, a large readership.
by James Prince
Posted by MLF Blog at 10:21 AM