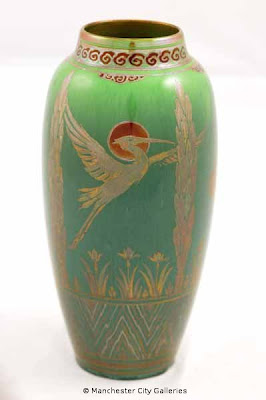 Following previous successful collaborations, Manchester Literature Festival and Manchester Art Gallery are again teaming up to inspire the city's writers. We are looking to commission a poet to produce creative responses to the forthcoming Pilkington’s Lancastrian Pottery: Art and Industry in Greater Manchester exhibition.
The exhibition will highlight Manchester’s role as a national centre of ceramic innovation and design in the early 20th century, showcasing 150 of the most significant pieces of Pilkington’s pottery and tiles from 1890-1930. The show will explore both the social and art history of the factory’s story. The image above shows a vase decorated by Gordon M. Forsyth for Pilkington's Tile and Pottery Company in 1908. Forsyth was chief artist at the factory. His main influences were Persian, Spanish and Grecian designs. Copyright permission to use the image has kindly been provided by Manchester City Galleries.

The poet will be expected to produce a minimum of six new poems to be performed as part of a special lunch time event to be in held in the Gallery as part of the Manchester Literature Festival in October 2010. The commissioned poems will also be displayed in the Gallery for the duration of the Festival and published online.

The commissioned poet will also be expected to help inspire members of the public by facilitating a two day workshop held at the Gallery on the weekend of 16th/17th October. As part of the workshop, the poet will encourage participants to produce their own creative responses to the exhibitions via a series of practical exercises aimed to stimulate ideas and develop craft.

The poet will be paid a total commission of £1200, including performance and workshop facilitation fees.

To apply for this commission opportunity you must live or work in Greater Manchester. All applicants are required to submit:

The deadline for receipt of applications is 5pm on Friday 19th March and they should be submitted by email to Jon Atkin at admin@manchesterliteraturefestival.co.uk or by post to Manchester Literature Festival, Beehive Mill, Jersey Street, Manchester M4 6JG. Shortlisted applicants may be invited to an informal interview on Tuesday 6th April.

More information about the Manchester Art Gallery can be found at http://www.manchestergalleries.org/

More information about the Manchester Literature Festival can be found at http://www.manchesterliteraturefestival.co.uk/

That's a really cool idea. Gordon M. Forsyth's vase is stunning, especially the crane with the sun. large floor vases has a lot of nice vases to check out as well.